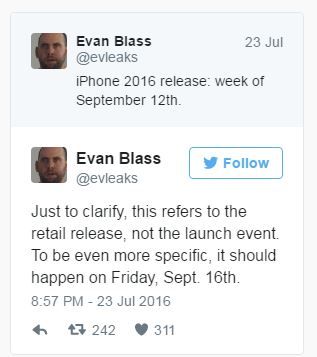 Following on from this weekend’s news from Evan Blass that the next iPhone would be launching the week of September 12, Blass has clarified this information by tweeting that the phone will actually go on sale on Friday, September 16.

Blass has previously gone on record as saying that the next iPhone will definitely not be called “iPhone 7,” and he seems to be sticking to this with his latest tweets, where he refers to the “iPhone 2016” without giving it a specific name.

Blass is well known for the accuracy of his information, particularly where Android news is concerned, and he also has a fairly good track record when it comes to Apple news, although not 100%.

As far as what the next iPhone might actually be called if it’s not going to be called the iPhone 7, 9to5 Mac writes that a new report from Apfelpage cites Chinese supply chain sources who have seen packaging and labelling for the next iPhone emblazoned with the name “iPhone 6SE.”