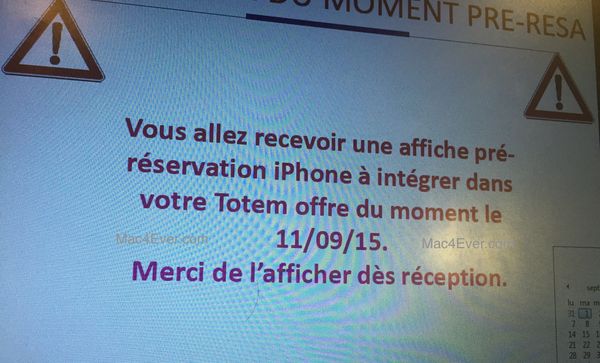 Last week we were telling you that the iPhone 6S and the iPhone 6S Plus are believed to go on sale September 18 and now we've got a fresh report claiming the pre-orders for the next-generation iPhones are due to start on September 11.

The above leaked image is believed to have originated at a carrier in France. The telecom operator seems to be informing already its employees that pre-orders for the iPhone 6s and 6s Plus are set to start on September 11.

September 11 is a Friday so that fits well with Apple's usual release cycle. The new iPhones have been said to come with 12 MP cameras, a new A9 SoC, 2GB of RAM, and touchscreens with support for "Force Touch".

WooHoo, I'm going to be pre-ordering a 6S Plus.

Eagerly waiting to see if the 16GB is being dropped.
Last edited: Aug 24, 2015
You must log in or register to reply here.