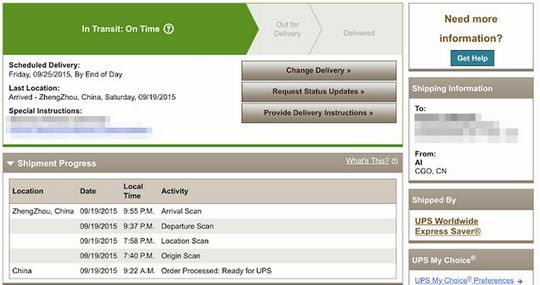 Great news if you’ve pre-ordered an iPhone 6s or 6s Plus, as MacRumors reports today that early pre-orders have already begun shipping, with some customers in the U.S. and other countries being notified that their new phones have shipped from China ready for delivery on September 25.

The pre-orders that are now shipping include those fulfilled by Verizon and T-Mobile as well as those from Apple. The notifications sent to customers show that the phones are scheduled for overnight shipment on September 24 ready for delivery on the morning of Friday, September 25.

However, there may be a slight snag if you live in either New York City or Philadelphia, as MacRumors has also reported that the visit of Pope Francis to those cities next week could cause delays to UPS deliveries. UPS has posted a notice on its website stating that there will be no pickups or deliveries in several Philadelphia and New York City (specifically Manhattan) zip codes between Thursday September 24 and Saturday September 26 because of security measures.

As MacRumors notes, Apple customers in these areas may still get their phones in time if delivered by FedEx or other couriers, and UPS does offer a personal pickup facility as well.

Sources: iPhone 6s and 6s Plus Orders Now Shipping Ahead of September 25

My status is Preparing for Dispatch.

Mine is still processing - ordered from Apple 40 minutes after launch 6s plus 64 gb - gray, Verizon model.

Did you get 25th for delivery?

Your status should change soon then.

Will keep checking and post here when it does.

My status changed a half hour ago to preparing for shipment

allan473 said:
My status changed a half hour ago to preparing for shipment
Click to expand...

That's great....Not long to wait now.
You must log in or register to reply here.