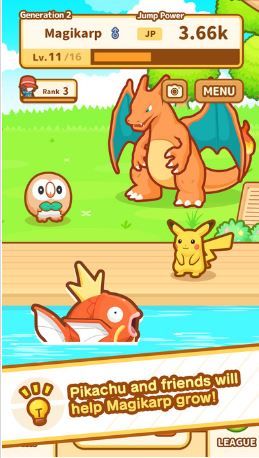 Following its recent soft launch in Italy, the Pokémon Company has today released Magikarp Jump to the app store.

The free-to-play game gives the hapless Magikarp its own time to shine in its own game where the player gets to catch, train, feed and develop Magikarp and turn them into the highest jumper in a bid to become the League Champion.

Should your trusty Magikarp get knocked out or retire when it reaches Lv. 20, you’ll have to start all over again and catch and rear another prize Magikarp. However, you won’t have to start entirely from scratch, as each new Magikarp you catch will be a little stronger than the previous one.

Magikarp doesn’t get the glory all to itself, however, as during the game other Pokémon, such as Pikachu, will turn up to help you out, with some giving your Magikarp food, for example.

The better your Magikarp perform in jumping tournaments, the more commemorative photos of your feats you’ll receive to share online with your friends.

Just as with Pokémon Go, the game is free-to-play but has in-app purchases where you can buy various items to speed up training, replenish food stock, and to help you catch more Magikarp, as well as accessories with which to decorate your Magikarp’s habitat.