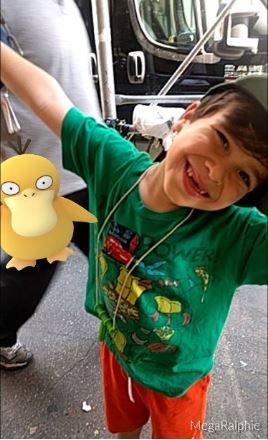 CNN has a great report about how Pokémon Go is having a really positive effect on some children with autism and Asperger’s syndrome. CNN talked to the mom of a 12-year-old boy with Asperger’s, Ian, who told them that since he started playing the game he has been wanting to go outside and interact with other children much more.

“He’s willingly starting to go out and going to PokéStops, get Poké Balls and catch creatures, whereas he didn’t have the interest to go outside before,” Ian’s mom, Stephanie Barnhill told CNN. “He’s not a go-outside-and-play kind of kid. But this game has enabled him to want to reach out to people and strike up conversations about creatures that they’ve caught.”

Lenore Koppelman told CNN that her 6-year-old son Ralphie, who has autism and hyperlexia, has also been wanting to be around other children more since playing the game.

“They want to play ‘Pokémon Go,’ and so does he, so it gives them something in common to do. The kids are so fixated on catching Pokémon that they are concentrating on finding them more than they are concentrating on his behaviours like they usually do” said Lenore. “As a result, he is finally finding himself in the middle of groups of kids he doesn’t even know, being welcome to play with them.”

As the game has only been out a month, no major research has yet been done about the effects of Pokémon Go, negative or positive, but Dr. James McPartland, director of Yale’s Developmental Disabilities Clinic in the Child Study Center said that it particularly appeals to youngsters with autism or Asperger’s because it is “consistent, stable.” “Kids with autism often like things that are like this that are list-based or concrete or fact-based,” McPartland told CNN. “They’re very good at learning about things and memorizing things, so not only is this a shared area of interest, it’s an area in which the kinds of strengths with autism can shine.”

On the other hand, Dr. Fred Volkmar, a professor in Yale’s Child Study Center, added a note of caution, saying that “The problem with Pokémon is that kids can do it to a point where it interferes with learning about the world. If you can make it somewhat functional, it’s fine. It’s detrimental if it’s the only thing they’re interested in. If it helps the kid become more isolated, it’s not good.”

McPartland countered his colleague’s argument by saying “I don’t think there’s anything intrinsically detrimental about ‘Pokémon Go.’ Any activity any child does should be monitored by a parent. And parents should say how much is appropriate and when is appropriate and with whom it’s appropriate. Like anything else, if those things aren’t monitored, issues could arise.”

“He seems happier. He’s laughing more. He seems more confident,” says Ralphie’s mom, Lenore. “He fist-pumps and says ‘Yes!’ when he catches one and then gives people high-fives and shouts ‘I did it!’ His father and I are both proud of him and how far he has come in only a week’s time.”

Source: How 'Pokemon Go' helps kids with autism and Asperger's - CNN.com
You must log in or register to reply here.