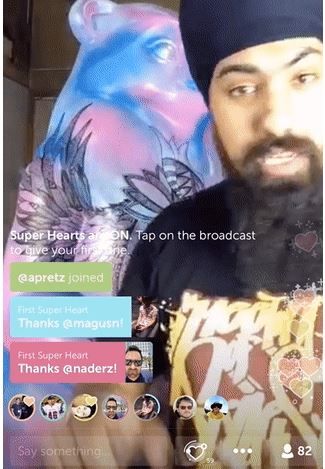 Periscope broadcasts have become one of the best ways to stream and view live content on the web. So easy to use for both viewers and broadcasters, Periscope is about to get much, much bigger with the announcement from Twitter that you can now reward your favourite broadcasters with Super Hearts.

Before today, Periscope viewers could express their love for their favourite Periscoper by simply tapping the screen to send a heart during a broadcast. Now that love has just become monetised with the introduction of Super Hearts, which Twitter refers to as “a more meaningful way to celebrate your favourite broadcasters…virtual gifts you can give and receive during live broadcasts.”

Bigger, and more animated, Super Hearts can be enabled by tapping the Super Hearts icon during the broadcast to activate them, then simply tap away as usual to send them.

To fund the Super Hearts you must first tap “get coins” and then buy a coin package from the App Store. You can then send Super Hearts until your coins run out, and then rinse and repeat! By sending Super Hearts you’ll be added to a leaderboard that will show who has given each broadcaster the most support. In turn, the broadcaster will be able to easily view who are their most loyal supporters.

Super Hearts can only be sent during a live broadcast, and broadcasters don’t have to use them if they don’t want to, they can simply chose to keep the old style hearts.

This seems like a genius move from Team Periscope just as the platform is really taking off in a big way.

Sources: Twitter is giving Periscope creators a chance to make a little money

Super Hearts, A New Way to Show the Love – Periscope – Medium
You must log in or register to reply here.