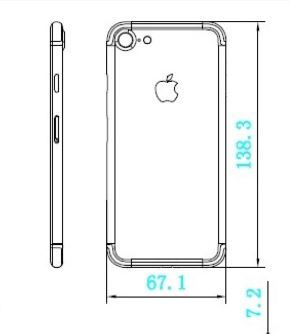 iPhone-7-related images are leaking on a daily basis at the moment, with today’s offering coming in the shape of a couple of schematics that it is claimed are of the 4.7-inch and 5.5-inch iPhone 7.

Reporting on the images, 9to5 Mac says that the schematic of the smaller phone is as you would expect from other recent leaks, complete with larger rear camera housing and antenna lines moved from the back to the top and bottom of the phone.

The figures provided with the schematics, if genuine, reveal that the iPhone 7 will be slighter thicker than the iPhone 6s, at 7.2mm, with the iPhone 6s being 7.1mm, so hardly noticeable. However, as with other recently leaked images, the schematics show that the camera bump does indeed remain, despite some rumours to the contrary.

Also, the schematics indicate that Apple has indeed replaced the headphone jack with a second speaker grille.

As far as the 5.5-inch iPhone 7 is concerned, the schematics reveal that it will have a frameless edge-to-edge display. This is where it starts to seem a little less likely that the schematics are genuine, as there is not expected to be an edge-to-edge display iPhone until next year. Or maybe Apple has just done a really great job of keeping this feature secret until now?!

You want me to go away, or the headphone jack to go away?!!
You must log in or register to reply here.