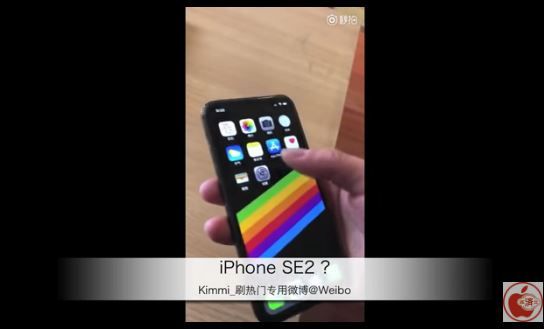 MacRumors reports today on a new video that was posted on Japanese website Macotakara that purports to show an iPhone SE 2. MacRumors is pretty sceptical about the video, believing it most likely to be an Android clone fake, especially as the video emanated from China, where such fakes abound. However, some of the commentators under the post are convinced that it might actually be genuine, so it's worth taking a closer look.

The phone featured in the video has a notch at the top of the screen, an edge-to-edge display, and a vertical rear camera, all crammed into an iPhone SE style body. It has long been rumoured that Apple is working on a new iPhone SE model, but none of the rumours mentioned that it would look so much like a small iPhone X.

The usually very accurate Ming-Chi Kuo of KGI Securities recently said that any forthcoming iPhone SE Mark 2 would not have many changes in terms of design. Kuo is not even that convinced that a new iPhone SE model is on the way at all, in fact.

However, there have been several conflicting rumours about a potential iPhone SE 2, with some saying it would arrive in early 2018 (which has obviously not happened), and others saying that it will not arrive until later in the year.

Looks pretty big for a SE.
You must log in or register to reply here.