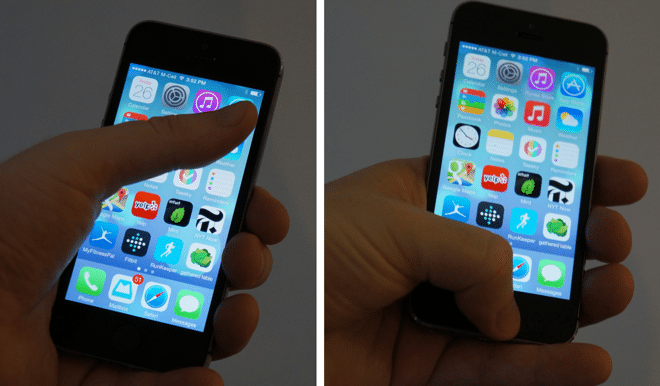 After Apple has finally released the 'phablet' iPhone, we're now hearing rumors that the company could be interested in reintroducing the 4-inch model.

The information comes from analyst Timothy Arcuri of Cowen and Company who claims that Apple has been working on a new 4-inch iPhone model that could debut in 2015. Here are more details from AppleInsider:

According to Arcuri, it's "possible" that Apple could launch three new versions of the iPhone next year, with a so-called "iPhone 6s mini" at 4 inches joining the current-generation screen sizes. The analyst said his sources suggest the specifications of the 4-inch model could be similar to last year's iPhone 5s. But the device may feature a new design with curved screen edges, much like the iPhone 6 and iPhone 6 Plus.

Arcuri's recent track record on Apple rumors is mixed. He did correctly reveal a number of details about the iPhone 6 back in January of 2014, but he also incorrectly claimed the iPhone 6 Plus would have a more powerful processor than the iPhone 6. If his latest claims prove true, the new 4-inch device could be a replacement for the iPhone 5c, which currently occupies the low end of Apple's smartphone lineup. According to Arcuri, the new 4-inch "iPhone 6s mini" may include "purpose-built low cost components" from Qualcomm to keep the price down.
Click to expand...

If Apple does plan to release a 4-inch model, perhaps they could get plenty of sales if they make it available as a true budget device.

A truly inexpensive iPhone could help in a big way to introduce more people to the Apple ecosystem instead of having them buy one of the many cheap Android phones.

Many who prefer a 4" screen would rather have a phone as nice as the iP 6. Just smaller.


Sent from my ancient but trustworthy iPhone 5.

Ledsteplin said:
Many who prefer a 4" screen would rather have a phone as nice as the iP 6. Just smaller.
Click to expand...

Exactly. I'm not sure why making it a 4" screen creates a "budget" phone. iPhones weren't budget models all the years leading up to the larger screens (with the possible exception of the 5c, which I never considered low quality anyway.)

DaveM said:
Exactly. I'm not sure why making it a 4" screen creates a "budget" phone. iPhones weren't budget models all the years leading up to the larger screens (with the possible exception of the 5c, which I never considered low quality anyway.)
Click to expand...

I switched over to an iPhone 5c from Android, and I certainly can say that its a much better phone than my old Samsung Galaxy Nexus. It may be a plastic body, but the plastic used on the 5c is a lot more durable than what is used on most android phones.

Would it be called the iPhone 6- ? lol

Knightrider03m said:
Would it be called the iPhone 6- ? lol
Click to expand...

No actually it will be called the iPhone 6S and the two current iPhone 6 models will be renamed the 6M and 6L.

Sent from my Nexus 7 using Tapatalk
You must log in or register to reply here.

Rumors of a 4-inch iPhone in 2015 Apparently False