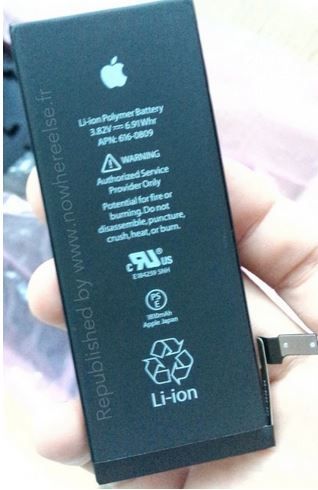 MacRumors has published two separate reports over the past couple of days that appear to show batteries from both of the new iPhones. If genuine, and there’s no reason to think that they are not, they reveal the different battery capacities of both phones.

The first photo, which showed the battery of the 5.5-inch iPhone, emerged on Friday afternoon, on Chinese website Apple Daily, via Mac Otakara. It shows that the bigger iPhone (possibly called the iPhone Air) could have a very impressive battery capacity of 2,915mAh. As MacRumors notes, this makes the iPhone Air’s battery capacity superior to that of the 5.1-inch Samsung Galaxy S5, which is 2,800 mAh.

The second set of photos, which surfaced on Saturday on Nowhereelse.fr, appear to show a battery for the 4.7-inch iPhone 6, and reveal that, as has been previously rumoured, the smaller iPhone will have a battery capacity of 1,810 mAh.