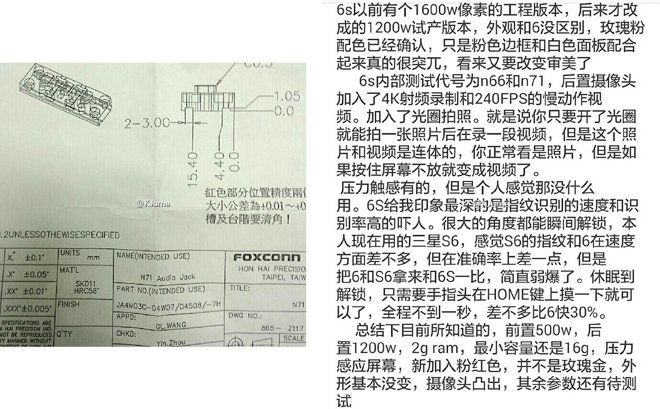 There are plenty of leaks related to the 'iPhone 6S' these days, with the most recent ones saying that Apple's upcoming smartphone will get faster LTE speeds along with improved battery and pretty much the same design as the current line-up.

Now fresh information coming from a leaked Foxconn document claims that Apple's next-generation "iPhone 6s" series will feature a 12-megapixel rear-facing camera, 4K video, and 2 gigabytes of RAM. The document is believed to be coming from a Foxconn worker.

The leaked images suggest that both the "iPhone 6s" and the "iPhone 6s Plus" will have 12-megapixel rear cameras, as well as support for 4K and/or 240 frames-per-second slow-motion video. The document also points to 5-megapixel front-facing cameras, which could represent a nice upgrade from the 1.2 megapixels on current iPhones.

Source: PhoneArena
You must log in or register to reply here.

The iPhone 6S Camera is Said to Have a 12MP Sensor, Support for 4K Video and Flash for Selfies