Meet the iPhone 8 and iPhone 8 Plus! 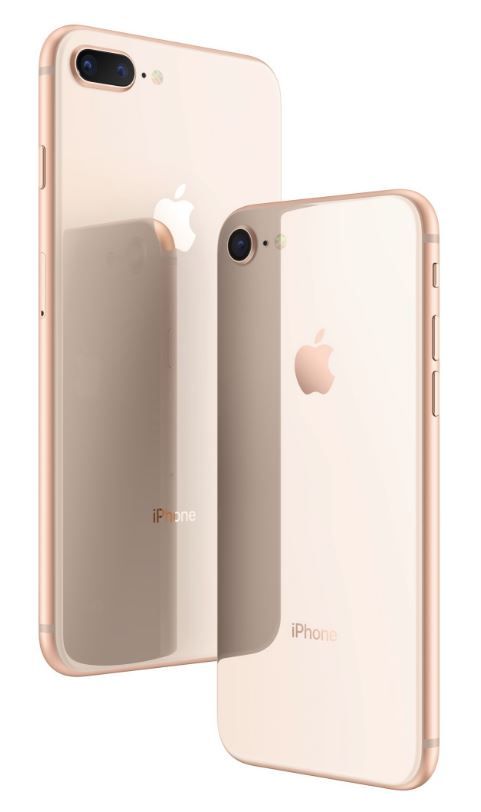 During an emotional inaugural event at Apple’s Steve Jobs Theater in Cupertino, California, the company announced the iPhone 8 and iPhone 8 Plus.

Both the iPhone 8 and iPhone 8 Plus are made out of the most durable glass ever used in a smartphone, and are available in three new finishes: space gray, silver, and gold. The glass finish is made using a seven-layer colour process for precise hue and opacity, along with a colour-matched aerospace-grade aluminum bezel. Both phones are also splash, water, and dust resistant, with a rating of IP67 under IEC standard 60529.

The new 4.7-inch and 5.5-inch Retina HD displays now benefit from True Tone, which adjusts the white balance of the display to match the surrounding light to ensure a more natural, paper-like view. The stereo speakers have also been redesigned to make them up to 25% louder, with deeper bass.

The iPhone 8 and iPhone 8 Plus, just like the newly announced iPhone X, both feature the new A11 Bionic chip, which is the most powerful and smartest chip ever in a smartphone, comprising a six-core CPU with two performance cores that are 25% faster, as well as four efficiency cores that are 70% faster, than the A10 Fusion. A new performance controller is also able to simultaneously harness all six cores, resulting in up to 70% greater performance for multi-threaded workloads. And that’s not all, as the A11 Bionic also integrates an Apple-designed three-core GPU that can deliver up to 30% faster graphics than previously.

Improvements to the 12-megapixel camera include a larger and faster sensor, new colour filter, and deeper pixels, as well as the highest quality video capture ever in a smartphone.

iPhone 8 Plus has dual 12-megapixel cameras and the new Portrait Mode with Portrait Lighting (in beta only, at first), giving you studio lighting effects in the palm of your hand on your iPhone.

As expected, the new phones can also now be charged wirelessly, thanks to the glass casing. And while Apple will not be bundling any charging accessories with the phones, they are compatible with the established Qi standard, and can therefore be used with many different third-party Qi wireless charging accessories, including two new wireless charging mats from Belkin and mophie which will be available at Apple.com and Apple Stores.

Apple also offered a sneak peek at its new AirPower wireless charging accessory that will be available in 2018, and which has a big enough charging area to simultaneously charge up to three devices.

Jrome.brooks said:
I know nobody not feeling the 8 and 8 plus but they are really good phones imagine if the iPhone X never existed everyone will be on iPhone 8/8plus nutts
Click to expand...

The 8 and 8+ look amazing imho, sort of a dated look but sexy.

Either way I've wanted an OLED iOS device for years so it kind of forced my hand.

At least I won't have to upgrade for years until they release touch iD under glass (wishing) with a ceramic frame.

Jrome.brooks said:
I know nobody not feeling the 8 and 8 plus but they are really good phones imagine if the iPhone X never existed everyone will be on iPhone 8/8plus nutts
Click to expand...

I want the X
You must log in or register to reply here.