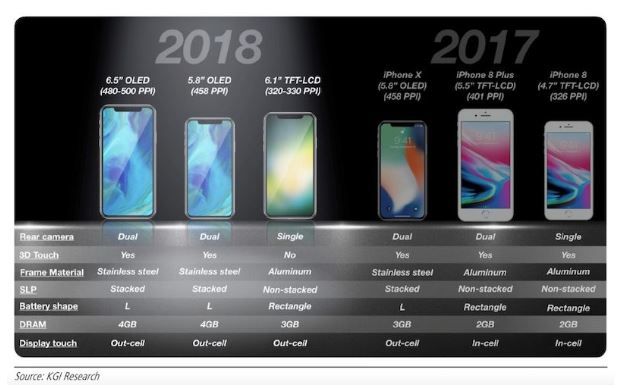 MacRumors reports that KGI Securities analyst Ming-Chi Kuo has today issued a research note focusing particularly on the 6.1-inch iPhone that Kuo says Apple will be launching this year, alongside two OLED models (2018’s iPhone X and iPhone X Plus, if you will).

Kuo says the 6.1-inch, non-OLED phone will be priced somewhere between $700 and $800, and will have an LCD display, aluminium frame, single-lens rear camera, and no 3D Touch. This supports previous rumours that all three 2018 iPhone models will use Face ID.

As to when the 6.1-inch iPhone might be released, Kuo says that the phone’s development is already “slightly behind” the two OLED models, but he thinks that means that it could “enjoy extended longevity into the 1H19F, boosting slow season outlook.”

In fact, Kuo thinks that this new phone will be so popular that it will account for approximately 50% of the 2018 iPhone line-up’s shipments, and will be strong all the way into 2019.

Interesting, you’d think the other hardware would need to be top notch considering the 3D Touch (a normal basic feature) may not be included.

It would be cool if they brought back the 5c concept with all the crazy cool colors.
You must log in or register to reply here.