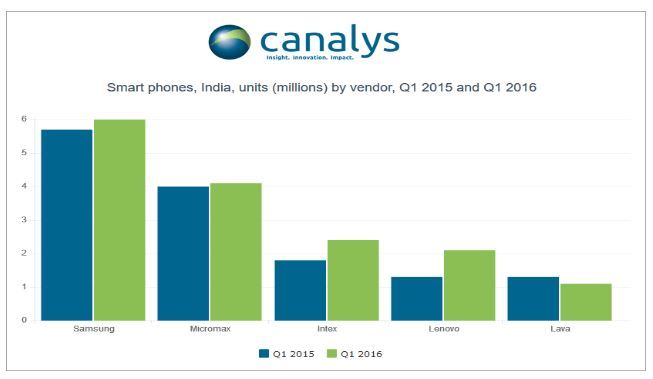 So, while Apple still has a lot of ground to make up with the main players in India such as Samsung and Intex (as shown by the above chart from Canalys), these new figures reflect that Apple is the second fastest growing smartphone vendor in the country, and could soon challenge Samsung in the premium market in India as well.

According to Canalys’s figures, as far as total market share for devices costing over $300 is concerned, Apple has grown from 11% in the first quarter of 2015 to 29% at the start of 2016. At the same time, Samsung’s market share fell from 66% to 41% during the same timespan.

However, Ang also had a note of caution for Apple.

‘Apple’s growth run could be short-lived. The 5s’ success in India has more to do with affordability of a premium brand than a preference for smaller phones, and the move to the more expensive SE will discourage budget buyers. Also, the recent government regulation curbing discounts on smart phones sold by online platforms will affect demand.’
Click to expand...

Lenovo and Apple are fastest growing among India’s top 10 smart phone vendors | Canalys
You must log in or register to reply here.