iPhone 7 Plus Was 2nd Popular Smartphone in China Last Year 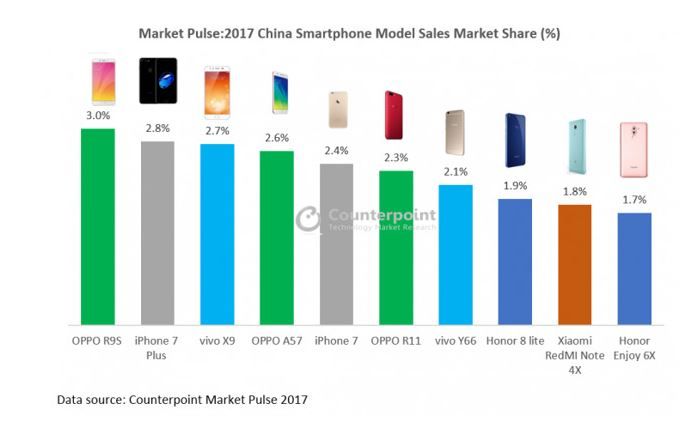 AppleInsider reports today that according to research firm Counterpoint, Apple continues to surge forward in the all-important, highly competitive Chinese smartphone market, with the iPhone 7 and iPhone 7 Plus both making the top 10 of best-selling mobile devices in China in 2017. The iPhone 7 Plus was actually the 2nd-highest selling smartphone in China last year, with a 2.8% market share, and the iPhone 7 came in fifth, with a 2.4% market share.

The number 1 smartphone in China last year was the Chinese brand, Oppo R95, with a 3% share. Other Chinese phones made up the rest of the top 10.

According to Counterpoint, iPhone 7 and iPhone 7 Plus sales rose in the second half of 2017, following a price cut, with sales of the 128GB iPhone 7 Plus benefitting greatly from a price cut to below the equivalent of $900, or a 16% discount.

Counterpoint also points out that the fact that the iPhone 7 Plus sold more than the iPhone 7 shows that Chinese consumers are not influenced solely by price, but by other factors such as better specs.

Source: Apple's iPhone 7 Plus was second most-popular smartphone sold in China during 2017
You must log in or register to reply here.

iPhone 7 Was the Best Selling Smartphone Globally in Q1