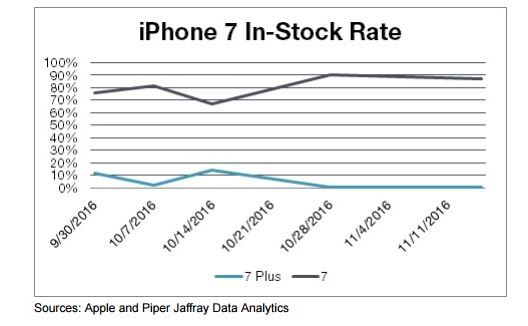 According to MacRumors, anyone hoping to buy an iPhone 7 before the end of the year might be unlucky, as Piper Jaffray analyst Gene Munster has found that the phone is still in short supply in some areas, and looks set to remain so right through until the end of the year at least

Munster checked 134 Apple retail stores in the US for in-store availability of both the iPhone 7 and the iPhone 7 Plus and found that 47% of models that he checked for were available, in comparison with 40% a month before. In contrast, by this time last year there was 100% availability for all iPhone 6s models.

Munster’s figures show that the iPhone 7 is still much more easy to obtain than the iPhone 7 Plus, with the latter having just 3% of SKUs available in Apple retail stores, down from 14% just 1 month ago.

The situation is even worse in China, apparently, with only a 16% availability of SKUs at 96 China Unicom stores.

Source: iPhone 7 Plus Stock Expected to Remain Tight Through Holiday Shopping Season
You must log in or register to reply here.