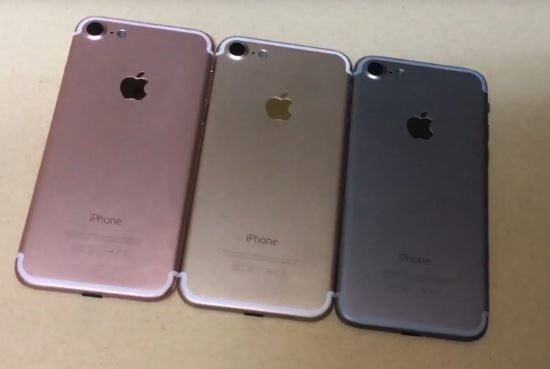 Another video has surfaced today featuring mock-ups of the forthcoming iPhone 7 in three different colours: Rose Gold, Gold, and what is referred to as “Space Black.”

MacRumors reports that the video first appeared on the ConceptsiPhone YouTube channel. It reveals very little in terms of new information about the next iPhone, with the pictured protruding camera, antenna bands at the top and bottom of the phone, and lack of headphone jack all being very familiar by now. However, this is possibly the first image of a “Space Black” phone.

Back in June, rumours first started to emerge of a darker version of the Space Gray colour, which was referred to by one source as “close to black, though not quite black.” The new, darker shade was also said to be more akin to the “space black” of the stainless steel Apple Watch rather than the lighter “space gray aluminum Apple Watch Sport.

The June rumours about a new Space Black colour variant diminished in recent weeks following other leaked images that were claimed to be of the next iPhone, and that showed the same four colour versions as the iPhone 6s and 6s Plus models, with no Space Black in sight.

Now, however, this new video has thrown up the Space Black rumour once again. There's no way of knowing how credible the video is, but the Space Black colour certainly looks smart!

That Space Black is very different than the jet black shiny Space Black finish on the Space Black Apple Watch. The iPhone mockup is more of a matt finish dark grey than any kind of a black finish. It more closely resembles their existing Space Grey finish.

I really like the Space Black, I hope that happens.

So far I like the rumours of 32GB of starter storage and Space Black.

Having said that I liked the Dark Blue that was rumoured too.

Sent from my iPad using Tapatalk

I don't know what I'm getting but need another phone it's time ...I've been using this iPhone 6s Plus since Nov I might actually make a year with a phone