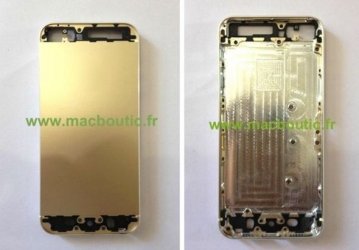 ​
Ever since images of leaked iPhone 5S parts started hitting the web, there have always been gold colored components flying around. While it is common for Apple to release white, black and even silver colored devices, the company has yet to release any in the gold color. The gold color has been rumored in the past as well as having well credited analysts note it down in reports.

French blog iPhon.fr post some photos today of an alleged gold iPhone 5S shell casing. With rumors stating that Apple is getting a bit more colorful with iPhones, judging by the several colors the iPhone 5C will come in, it would be no surprise to see a gold or even aluminum color of the iPhone 5S. It's hard to tell whether the photos are real, another knock-off, or just an elaborate hoax. But it is important to note that the logos and text on the back of the shell are non-existent.

Source: Google Translate
You must log in or register to reply here.