When the iPhone 4 was revealed, it was obvious that its design was more fragile than the previous generation: If you double the glass panes, the accidental shattering rate will increase too.

According to consumer electronics warranty company SquareTrade, the "aluminosilicate glass seem to crack at least as often as the old glass." Their data shows that 3.9% of all iPhone 4 owners have reported a cracked screenmeaning the front and the back glass paneswithin the first four months. On the iPhone 3GS, this percentage was only 2.1%.

These statistics also show that 82% of all iPhone 4 accidents involve shattering glass panes, compared to 76% of the iPhone.

The company says that "at least a quarter of the broken glass claims involved the back screen." I was expecting an even distribution, but this could be easily explained by the fact that many people use iPhone jackets to protect the back of their devices.

However. while SquareTrade concludes that "the iPhone 4 is significantly more prone to physical damage than its predecessor", they couldn't find any connection between cracked backs and cases.

The total percentage of accidents per unit has increased too: From the 2.8% of the iPhone 3GS to the 4.7% of the iPhone 4. That's almost 70%. Perhaps is time for Apple to give up, admit the empirical evidence and update their phone with a more durable material. [SquareTrade via MacRumors]

I love it! That seems like a pretty good percentage any way you look at it.. I'm shocked it's not higher! 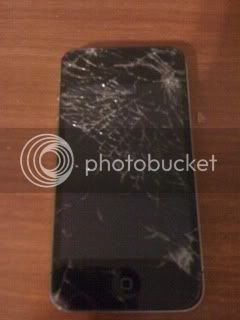 There is a very simple solution to this

Venom said:
There is a very simple solution to this


I did have a case on it when it cracked which is why the back was fine. I had a screen protector on the front that held all the glass together.

well at least the back panel is very easily replaced.

If glass is such a problem for people there's $20 plastic backings on eBay in many colours. Only takes a minute to change.

I'm a bit upset at the process to change the screen though... muhc much much more difficult and expensive to change.
B

Wish I knew this earlier. The glass on mine shattered already &#61516;

ouch, that must be a long drop to smash like that, i wonder how apple will have the design in the next iphone, but it feels really nice in the hand the iphone 4, i had a case and gave it away
K

you don't know how to take care of things, that's why you have shattered glass. Be careful with the darn thing....
C

Am very disappointed with iphone4's screen. It dropped from a footstool less than a foot tall in my bathroom and now have a hairline crack and is unresponsive. I called Apple and was told I have to pay $199 for out of warranty replacement. I've only had it 2 weeks and dropped it this once. It does have a screen protector but I did not buy a case as I am waiting for the free one they're supposed to send me. They make it so pretty but so fragile. I am soooooo disappointed with Apple.
F

My 2nd iPhone 4 screen didn't shatter, It had a "Hair line crack" right over my front view camera so I took it to apple & they gave me a new one for free......
D

Kaemon said:
you don't know how to take care of things, that's why you have shattered glass. Be careful with the darn thing....
Click to expand...

Srsly.. it seems like you were careless when you broke the screen. I do admit, I've dropped mine once and it almost gave me a heart attack. After that, I am VERY VERY careful with my phone now.

its very easy to tell him just be careful but then its also very easy to drop it by accident no matter how carful you are, my brother jumped into the beach with his and stayed in for a few minutes before realising it was his iphone thinking it was something else. i have spilled water on mine, a very small amount and it worked fine after.

The way I see it, with any electronic equipment that you drop, the chance of having something affected is more likely. I have insurance on mine.
You must log in or register to reply here.

iPhone 4 Protection Not All It's Cracked Up To Be