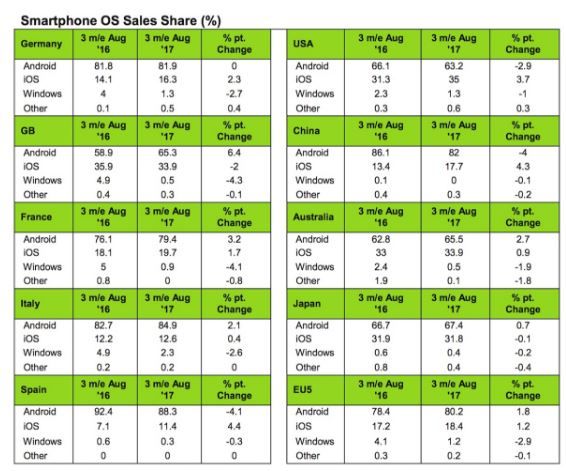 9to5 Mac reports that according to new data from Kantar, iOS has seen its market share growth increase year-on-year in August in seven of the nine biggest markets that Kantar is monitoring. The most notable exception to the rule is the UK, which saw a two-point fall as the result of a big marketing campaign from Samsung.

In the five biggest markets in Europe , iOS marketshare rose 1.2 points to 18.4%, with the exception of the UK, where Kantar says that iOS marketshare fell by 2 points thanks to a robust Samsung in the UK and the release of the Galaxy S8 and J3 (2016) models.

“Samsung took full advantage of the weeks just before the iPhone 8 and iPhone X were released in Great Britain, with significant promotional activity that helped drive its overall share to a three-year high of 38.4% for the three months ending August 2017,” said Dominic Sunnebo, Global Business unit director at Kantar Worldpanel ComTech. “More than one in four Galaxy S8 buyers cited a specific promotion as a key purchase influencer, and almost half said that a good deal on the price of the phone was key to their purchase.”
Click to expand...

Source: iOS gains market share in U.S. and elsewhere, falls in UK due to Samsung promotions
You must log in or register to reply here.

Apple Increases Lead Over Samsung in US Smartphone Market

iOS is Top-Selling Smartphone OS in US