I have an 8GB 3GS that I use as a backup phone. It has been running perfectly fine, at least until yesterday when I upgraded it to iOS 5.0.1. With the update to iOS 5 came a whole bunch of sound problems.
The following features are not working correctly since the update:
-no unlock sound (setting is active)
-no lock sound (setting is active)
-ringer volume cannot be increased/decreased with side volume buttons
-no sound when playing youtube clips or any other videos
-no keypad clicks
When I receive a call on the phone it rings as normal, and during calls the speakerphone setting plays aloud as normal, so the speaker itself appears to be fine. 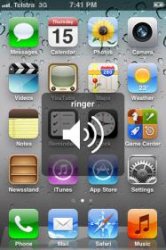 Interestingly I've discovered that if the phone has been left sitting unused for a while when I pick it up and unlock it the unlock sound always works. At that point I can also adjust the ringer volume with the volume buttons but only for a about 3 seconds. After 3 seconds or so the volume buttons stop working, and pressing them causes the above logo to be displayed

It's as if a component of iOS is launching in the background and causing a conflict with the effected sound functions.

Any suggestions would be greatly appreciated.
Thanks
Last edited: Dec 18, 2011
OP
J

well I just attempted a restore from DFU mode (screen was completely black when iTunes detected a phone in recovery mode) but that didn't help at all.
You must log in or register to reply here.