Inside the Apple Music Festival 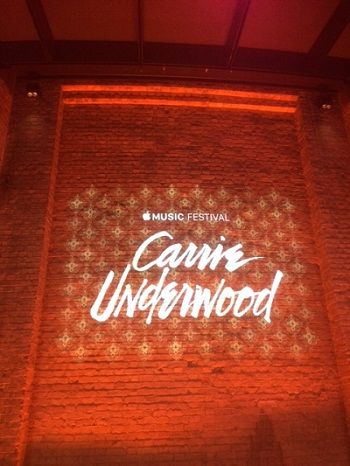 Apple’s annual music festival is now well underway at London’s Roundhouse; previously called the iTunes Festival, the free live music festival runs for 10 nights from September 19 to 28, featuring some of the biggest names in music. I was lucky enough to get to attend last night to see the Apple Music Festival’s first ever country music night in the UK featuring rising US star Cam, UK country act The Shires, and headliner Carrie Underwood. It also gave me the chance to see if Apple runs a music festival with as much care and attention to detail as it does every other element of its business, and the answer is a resounding “yes”!

When you arrive at the venue after lining up outside you’re greeted at the door as you enter by someone saying “welcome to the Apple Music Festival” and hoping you enjoy the evening, before you receive your wristband from a team of polite and friendly Apple employees wearing special Apple Music t-shirts. The whole experience to that point feels more like a leisurely trip to an Apple store than attending a gig, and infinitely more pleasurable than the usual London rock gig experience.

As you might expect with Apple, it’s the little details that matter. For example, an Apple employee was checking out the queue to see if there was anyone who might be attending the concert alone, and therefore not using their guest ticket, and asked if they’d like to give their unused guest slot to one of the fans on the reserve list who were waiting patiently for returns. A really neat touch that showed that Apple was looking after the fans’ best interests.

Once inside the venue, it was typically understated Apple elegance in terms of the branding, with black and white photos on the walls of the artists performing, and some nice lighting effects. As you might expect, you could even buy your drinks at the bar using Apple Pay.

The mixing desk and control centre at the back of the venue was one of the most impressive I’ve ever seen, with an incredible array of audio visual equipment (including lots of MacBooks, of course!). Likewise, the lighting effects for all three acts, not just the headliners, were simply stunning and state-of-the-art.

The performances from all three artists were amazing (and all arrived onstage bang on time), the atmosphere was so friendly and mellow, and it really was a great night of free music for all the fans. Overall it seems like Apple is as adept at running a music festival as it is at everything else!
You must log in or register to reply here.