The Best Christmas Gift For Kid - Candy Link Gift
Candy Link Gift is an eliminating casual game. Character in the game is candy, which is so cute that I was attracted to it when the first time I saw it. Looking at these sparkling crystal candies on the iPhone screen, anyone would like to pinch their face.
It would be a pretty good choice for kids to have fun at this Christmas, or for you to relax yourself on the way back home after one day's hard work. 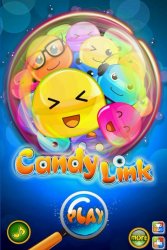 Well, the first thing leaves me a deep impression on Candy Link Gift would be the multiple facial expressions, interaction and the fashionable dressing of the cute candies.
Then, I will explain the concept for the uninitiated-simply dragging, dragging the candies moving to different directions.
If there are three candies with the same color in one line, they'd be eliminated and the black lattice of the three would turn yellow.
Attention!!Only when all the black lattices turn yellow will this round cleared.
There are 5 levels in Candy Link Gift and each level is made up by 10 rounds and one attached game.

Its not hard to get a 3-star. Link the star-candy into 4 candies to get one star. And therere 3 stars in each round. With the help of the items and the magical candies it would be easier for you to gain the goal.

Items are located on the bottom of the screen. Therere item for extending time, item for seeking move, and more. However you can also purchase them from store.

In the second level of the game youll find the rascal candies which will lock the candies at the same line so you cant move them. Coming to the third level youll find another naughty boy as he can lock the whole screen. Please be careful with that.
&#12289;


Because of the fixed obstacles and rascal candies it would be harder and harder for the players as they are entering into the higher level of the game, especially for the game freaks.

Its available with paid and lite in the App Store for both iPhone and iPad. 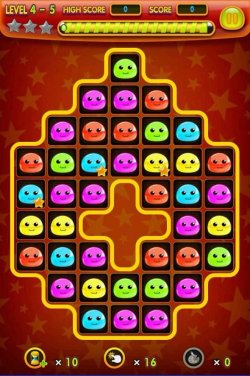 With a lightening breaking the silent dark sky, a box appeared at Jigus window shell. Frightened and curious, he took the box into his room and opened it. Shining and glorious candies popped out, more and more, minutes later, almost got full of the room. He accidentally discovered that he could put the candies back to the box by arranging 3 same colors in a line. Start this journey by just one click: App Store - Candy Link Gift
You must log in or register to reply here.