Here is the story:

I went looking around and noticed the Restrictions tabs was enabled(ON) and wrote it off to the jailbreak(i did the hr before) as I said I was a noob.

Called ATT for pin to get PIN(4 numbers) to turn to off restrictions area(I tried 8 times and have 2 attempts left. Now keep in mind Im a smart guy and have a memory like an elephant. My girl has no clue there was a section like this as this was her first iphone(so she didnt restrict it)--->no luck at ATT and kicked to Apple

Called Apple for pin to take restrictions off-----> Keep in mind I never asked for an unlock code. I explained my dilema and asked was for the 4 number PIN. He said there is no way to get it and the JB "F'd" my phone up and once I did the JB the only way to lift the restrictions was to restore. I restored, lost the JB and went to section and saw the Restrictions was still ON. So restrore didnt work and yes i did a complete restore. So now I tell ATT that its still on and they say call Apple, I call Apple put on hold forever, get in to an agent, placed on hold, phone disconnects, etc etc. I going to threqaten them next time OR I ll just go to Apple store 1 hr from my house.

Now Im thinking......is this an unlocked Apple phone from factory?

Called my girl and looked at her identical phone and BAM same thing.

Long story short: I went into the registry to find the PIN and that part of registry was cooked!!! Not only was it cooked it means there in no 4 number PIN to verify. So WTF? Att wont help and Apple hates me. I dont know what I should do.

Should I keep my mouth shut and figure out if these phones are Apple unlocked? If they are how does one create that part of registry?

What recourese do I have?
OP

The ATT guy said bc I JB that he tought thats why it was restricted(i hadnt even thought about the other phone as i wrote it off to JB it). So I did the restore and guess what? No dice. There was literally the same restriction ON AND not only that it showed the 8 tries prior to the restore. So i took my girls for the hell of it and restored it also to no avail.....the phone restored but the restictions weerree still on which isnt possible right? So says ATT. So here are the facts: I saw the PIN numbers on another 3gs that i went insode of, then another one had a code too, then my phone...zilch! Either way Im in a jam bc if there is a way to recontruct the couple missing lines of registry I will keep the phone and have the refund sent intp our acct.
So here are the facts:
My phone--> restored 2X to no avail
My girls same phone----> restored 1X to no avail
So there is nothing reading that part of reg bc its toasted. I need help with a new registry line or 2..........
Keep in mind: Apple hangs up on me, no answers from ATT, I mention the ATT keynote and say Ill bash her if not tipped on these issues kept out of my reach.
PS photos are today.
see pics 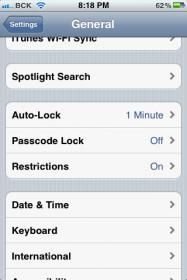 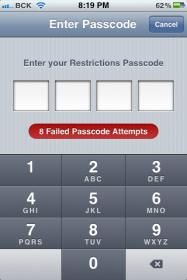 I wont restore again as how is the restrictions going to reset if there isnt a section for it anymore in reg?

did you restore your phone as a new phone or restored from you previous backup? You may want to restore as a new phone just to try if is not been done like that before.
You must log in or register to reply here.

M
Emergency calls only. Cant get to my start screen.