Crap! I’m Broke: Out of Pocket Adulthood Game is Out Now 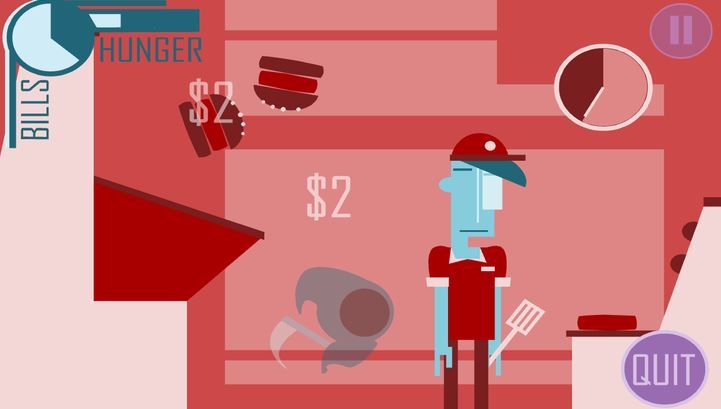 Winning the award for the best game name of the week, and also possibly the most imaginative and unusual game of the week, we have Arcane Circus’s Crap! I’m Broke: Out of Pocket. Billed as a comedic take on adulthood with a Cubist aesthetic art style, Crap! I’m Broke addresses the issue of underemployment with mini-games and a wry sense of humour.

The game begins with you attempting to find work in order to keep the wolves from the door. Each “Help Wanted” sign offers a time-limited mini-game, or mini-job, such as scrubbing dishes at the local diner, flipping burgers at a burger joint, or putting coloured cans in the right bins at a factory.

All the while you’re working against the pressure of a countdown timer and a hunger meter. If you don’t pay your bills on time then you’ll be evicted, and if you don’t save up enough money for food, you’ll starve. But, on the up side, if you pay your bills early then you will unlock micro-games that you can play without a time limit.

You can also complete special “Employee of the Month” challenges to earn extra bonuses after each successful job.

And just like in real life, surprise random events can conspire to ruin your week and increase you bills at the end of the month.

To make more money, you can earn lifetime achievements and buy items to unlock higher paying jobs. You can also sell your achievements and items to make ends meet. Or, you can simply allow yourself to go into debt, but if you don’t pay your debts in time, you’ll be evicted.

The game also has a karma system that rewards good behaviour, such as donating to charity or competing challenges. Karma increases your chances of winning lottery tickets, getting gifts in the mail, and so on. On the down side, bad behaviour will result in a streak of ill fortune.

“In college - when I was a fairly broke student - I received a dentist bill of €80. It may not sound like much now, but it might as well have been €1,000 back then,” says Molly Heady-Carroll, co-founder of Arcane Circus. “I wanted to make a game that shows players what it’s like to just get by - and what it really takes to basically stay above water.”

“When I moved out of my mom’s house, I had to find a job immediately. I remember just walking around looking for ‘Help Wanted’ ads in windows, which is what influenced the idea of running around town to find jobs in the game,” says Erik van Wees, co-founder of Arcane Circus. “Other real-world experiences also had an effect on gameplay - such as having to choose between bills and eating. That’s a tough choice no matter how you slice it.”
Click to expand...

Special Enquiry Detail: The Hand that Feeds Out Now for iPad and iPhone