Costco to Start Selling AppleCare+ for iPhone and iPad 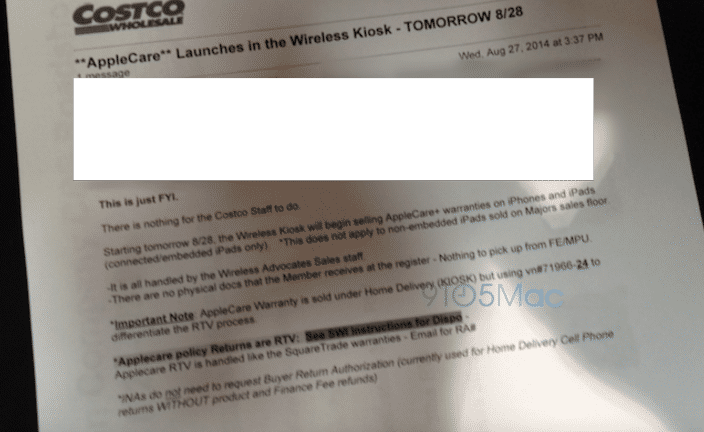 The Wireless Kiosk will begin selling AppleCare+ warranties on iPhones and connected/embedded iPads. This offer does not apply to non-embedded iPads sold on Majors sales floor. Back in 2010, Costco had stopped selling iPods and iTunes Store gift cards back in 2010, but in June it announced a new deal with Apple to sell iPhones and iPads.

An internal memo has been sent to employees at Costco stores indicating that the company will begin offerring AppleCare+ on iPhones and iPads sold through its wireless kiosks. Here are some more details:

The notice details the process for selling the extended warranties and states that the offer only applies to “connected/embedded iPads” sold at the kiosk, not those sold on the sales floor.

The wholesaler only recently started carrying Apple’s mobile products again earlier this year after a multi-year spat that resulted in the decision to remove them from Costco shelves. The devices are available both through the company’s website and in-store through its specialized mobile sales kiosks.
Click to expand...

Are you a Costco member? If so, leave your comment below and let us know whether you'd be interested in getting an AppleCare+ warranty for your iPhone or iPad.

Costco to Start Selling iPhones, iPads and Other Apple Products

Discounts on iPhones, Macs, and more: What's the deal?

GameStop May Soon be Selling iPads, iPhones and iPods