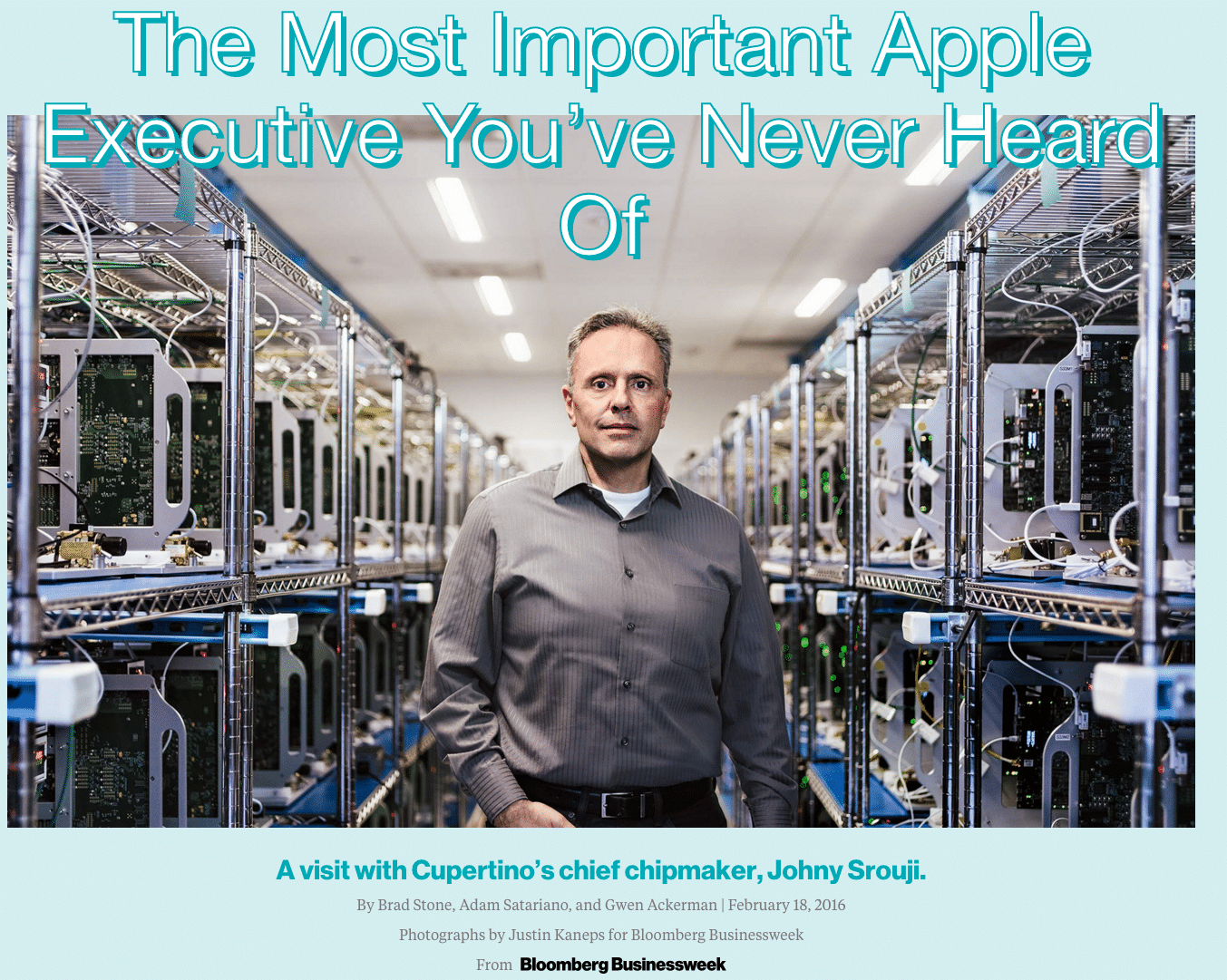 A little over a year ago, Apple had a problem: The iPad Pro was behind schedule. Elements of the hardware, software, and accompanying stylus weren’t going to be ready for a release in the spring. Chief Executive Officer Tim Cook and his top lieutenants had to delay the unveiling until the fall. That gave most of Apple’s engineers more time. It gave a little-known executive named Johny Srouji much less.

Srouji is the senior vice president for hardware technologies at Apple. He runs the division that makes processor chips, the silicon brains inside the iPhone, iPad, Apple Watch, and Apple TV. The original plan was to introduce the iPad Pro with Apple’s tablet chip, the A8X, the same processor that powered the iPad Air 2, introduced in 2014. But delaying until fall meant that the Pro would make its debut alongside the iPhone 6s, which was going to use a newer, faster phone chip called the A9.

This is the stuff that keeps technology executives up at night. The iPad Prowas important: It was Apple’s attempt to sell tablets to business customers. And it would look feeble next to the iPhone 6s. So Srouji put his engineers on a crash program to move up the rollout of a new tablet processor, the A9X, by half a year. The engineers finished in time, and the Pro hit the market with the faster chip and a 12.9-inch display packed with 5.6 million pixels.

Srouji was nicely rewarded for his efforts. In December he became the newest member of Cook’s management team and received about 90,000 additional shares of Apple stock, which vest over a four-year period.

He also stepped into the kind of spotlight he’s avoided since joining Apple in 2008. Srouji runs what is probably the most important and least understood division inside the world’s most profitable company. Since 2010, when his team produced the A4 chip for the original iPad, Apple has immersed itself in the costly and complex science of silicon. It develops specialized microprocessors as a way to distinguish its products from the competition. The Apple-designed circuits allow the company to customize products to perfectly match the features of its software, while tightly controlling the critical trade-off between speed and battery consumption. Among the components on its chip (technically called a “system on a chip,” or SOC) are an image signal processor and a storage controller, which let Apple tailor useful functions for taking and storing photos, such as the rapid-fire “burst mode” introduced with the iPhone 5s. Engineers and designers can work on features like that years in advance without prematurely notifying vendors—especially Samsung, which manufactures many of Apple’s chips.

At the center of all this is Srouji, 51, an Israeli who joined Apple after jobs at Intel and IBM. He’s compact, he’s intense, and he speaks Arabic, Hebrew, and French. His English is lightly accented and, when the subject has anything to do with Apple, nonspecific bordering on koanlike. “Hard is good. Easy is a waste of time,” he says when asked about increasingly thin iPhone designs. “The chip architects at Apple are artists, the engineers are wizards,” he answers another question. He’ll elaborate a bit when the topic is general. “When designers say, ‘This is hard,’ ” he says, “my rule of thumb is if it’s not gated by physics, that means it’s hard but doable.”

Srouji recently spent several hours with Bloomberg Businessweek over several days and guided a tour of Apple chip facilities in Cupertino, Calif., and Herzliya, Israel. This was, no doubt, strategic. Investors have battered Apple stock over the past year, sending it down more than 25 percent. Most people are already pretty satisfied with their phones, the criticism goes, and aren’t compelled to spend an additional few hundred bucks on an upgrade. (In March, Apple intends to announce an updated iPad and smaller-screen iPhone featuring the latest A9x and A9 chips, according to a person familiar with the plans, who wasn’t authorized to comment publicly.)

Apple’s usual response is to point to Jony Ive and his team of fastidiously cool, Wallabee-shod industrial designers, or to highlight elegantly tooled aluminum or an app or some new feature or gadget. There’s always something new to show off. But none of that has ever explained anything about a crucial part of Apple’s profit machine: its chips.

“I think it’s too good of a story not to be told at this stage,” Srouji says. “Hopefully, we won’t reveal too much.”

Continue Reading at Bloomberg.
You must log in or register to reply here.