What might be of interest to any techhie following my 'digital & analogue' clock issues on iPhone is the fact that one very rarely sees digital clocks were I live. ( Barbados, Caribbean) Bedside alarm clock radios are rare indeed and most timekeeping in the home is by wristwatch, phone or AA battery powered wall clock which tend to have hands. 'Mains' powered clocks unless specifically set up for 50hz rather than the usual 60 hz simply run very slow ie losing 1 sec a minute. Most electronic devices are fine as are things like microwave and kitchen oven clocks. Security lighting timers running off mains are affected unless 'dusk to dawn' ie a 4h setting from dark will stay on 5 hrs, 6 will be 7+ and so on. Power here is 110/220 @ 50 which is why So being used to clocks having hands I prefer my phone to look that way too - which is ( in the world of widgets) not easy!!
Last edited: Mar 5, 2021

Island Life...How Horrible for You
LOL

At least the strange power supply doesn't affect most user-electronics. Many of the plug in chargers and power sources actually say 50-60hz and even if they only say 60 they work fine. Other than clocks & time based stuff all works properly. The plug pin configuration is same as North America. 'Brit stuff' is very different though and far from cross compatible. But most electronics now are long past the B'dos which was 'mostly Brit imports'.
South America where my wife is from is even stranger - there are areas in Georgetown Guyana where 'one side of the street' is 110 based, cross the road it's 220. All about 'vintage' I guess. Trying here to use my big old 60 hz Canadian bought B&D power drill is very tiring though as it just doesn't have much oomph to drill in concrete. Cordless hammer-drills have solved a lot of that though.

Speaking of 220 voltage.
I dealt with power source issues when I owned my Embroidery Business.
(Four years and shut it down before I had a Mental/Physical Breakdown as I was wearing many hats and working off Deadline after Deadline

).
I rented a space in Nashville that became way too expensive, not to mention the traffic to get there

So we built a shop into our home which is Now a very Long one car garage. I had Industrial Tajima machines. A 12, 6 and 1 Head.
My 12 head needed 220 voltage to run. We had to get an external power source (can’t remember what it’s called) and wire the 12 head plug into it in order for my machine to run correctly.
OP

And here I thought a 'simple Tennessee Girl' -NOT- Once one goes beyond 'mainstream appliance type things'power source can get complex in a hurry. And errors can be very frustrating and also expensive. When I travelled more ( early years of flying, some to Europe and beyond) I learned that if something 'looks different', it's different. If it looks 'the same' it might also be 'different' - and always carry a non-electric shaver -
OP

I'm far from electrically wise BUT I'd suspect 120/ 240 @ 60 is a North American standard only. The rest may vary most parameters depending on when & how power grids were built and updated. And may places do not really have a system of 'licencing' electricians in that a given person could be an electrician on Monday, a plumber on Tuesday and a Barber on Wednesday. Need I say more (??)
OP

As a sidenote- on the advice of our Barbadian but Jamaican trained and certified electrician - we use power control before the surge protection. But 50 hz Control boxes would have to be imported at 4X the off the shelf price that most Bajans are happy with and that's the route we went. It is all 'plug in' and self ( me) installed. The boxes are for the circuits in the bedroom ( entertainment -TV, TV box, DVD, Coax Boosters) and 'can' protect either voltage or surge. But not both. We do the same at the desk for the computer, modem-router, printer and main telephone base using a second box. Beyond and downstream of the power control box are the surge bars. The boxes in the mode we use them will shut you down in any high voltage supply event. They will warn on low voltage and when beyond a limit then shut you down as well. Before an upgrade to the islands generators ( oil fired steam turbines) we used to see a lot of low voltage cautions. But again they look for 120 so 110 is 'borderline' even if all's on spec, and will flash yellow below that. Then comes surge bars for anything of any value!! When power blacks out ( relatively frequent) I immediately unplug all surge bars from the controllers and can do with one hand ( other hand is for flashlight) I don't reinstate until power has been restored and is stable for at least 10 min ( no flashing yellow anywhere.) Some power restorations can be rough and crude wilh lots of 'off & on' cycling.

Then I plug back in. Fortunately the fibre optic (telephone & internet) network is more lightning resistant than the copper network it replaced too.
Last edited: Mar 5, 2021
OP

Voltage controller as I have it set up. Sorry about the dusty look - it's a major 'hands & knees' affair to get to it. Other identical box is in bedroom and also close to floor level so equally dusty. 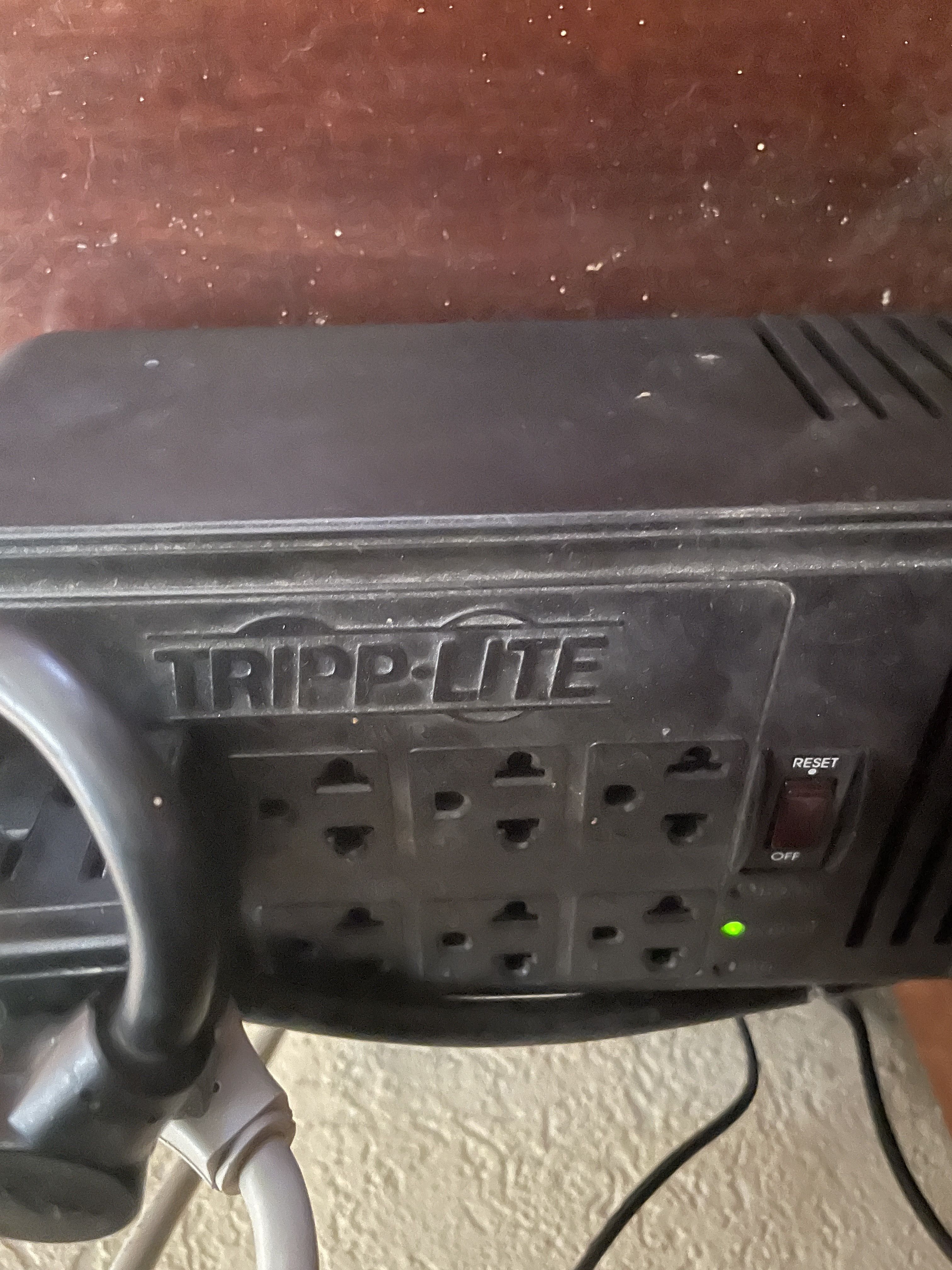 I learned a lot about Electrical and Computerized components while running my business. Not by choice, but necessity.
Troubleshooting was a daily occurrence.
I had a Good Maintenace Man, but he didn’t come cheap. And he was Always Busy.
So a lot of my issues would be talking ME through a process over the phone to get my machine back up & running. This was Critical
Time was never My Friend. Not only did I run production. Flats (clothing, jackets, blankets, ect) on 12 head and caps on 6 head while running small orders on 1 head. I was definitely a Multi Tasker

I was dealing with clients, inquiries and sending quotes,
having to look at designs to send out to be formatted then get the design back and finish up the process. Billing, Marketing and Sales. Of course, most of my time was spent in production. Hooping garments and caps 1 by 1
Babysitting machines as needles break, thread breaks, bobbins run out, ect

Then there was steaming, sorting, folding.
New orders had to be counted in and sorted according to sizes to make sure vendors sent correct pieces. I had previously worked for the man I purchased the company from as
his production/ office manager for several years. But running as a Sole Proprietor and doing EVERYTHING by Myself became Overwhelming. And the machines had seen better days by the time I purchased them.
After that I became a Certified Medical Transcriptionist which wasn’t a great choice.
I should have went into Coding. Still considering it. Electricity is Essential for sure. It is a source to be Respected and not taken for granted!

dmoskaluk said:
Voltage controller as I have it set up. Sorry about the dusty look - it's a major 'hands & knees' affair to get to it. Other identical box is in bedroom and also close to floor level so equally dusty.
View attachment 52709
Click to expand...

This probably what I had connected to my 12 head...the other machines could handle the 110. Yours looks like it’s definitely been around for awhile. Mine was brand new and definitely Not Cheap. Not to mention what I paid my Maintenance Man to wire it all up.
But it was as I’m sure yours is-A Necessity.
OP

Makes me feel like a bumpkin simpleton retired to the coconuts. But I ran my race, lived my boyhood dreams, but also knew when 'it was time'. When I retired the rule was '60' and not a day beyond. I went at 56 while I still could retire with my licence medically intact, as my sugar and blood pressure numbers while not medically disqualifiers, we're rising towards 'medication needed' thus temporary grounding in the least. There were also many things looming in the business which I was not comfortable with, among them was pension stability. So now I worry about the rate of swing on my hammock, and the price of coconut water

And Thank You for the Nice Compliment

Running your own business is Not for the Faint of Heart. The Taxes alone will get You.
And when you own your own business Everyone thinks you’re Loaded and expect you to pay for dinners, lunches, drinks when out. Whew! Now I have Lots of Thread to hopefully sell to someone. Trust me 100’s of Cones of Thread are not Cheap.
You must log in or register to reply here.