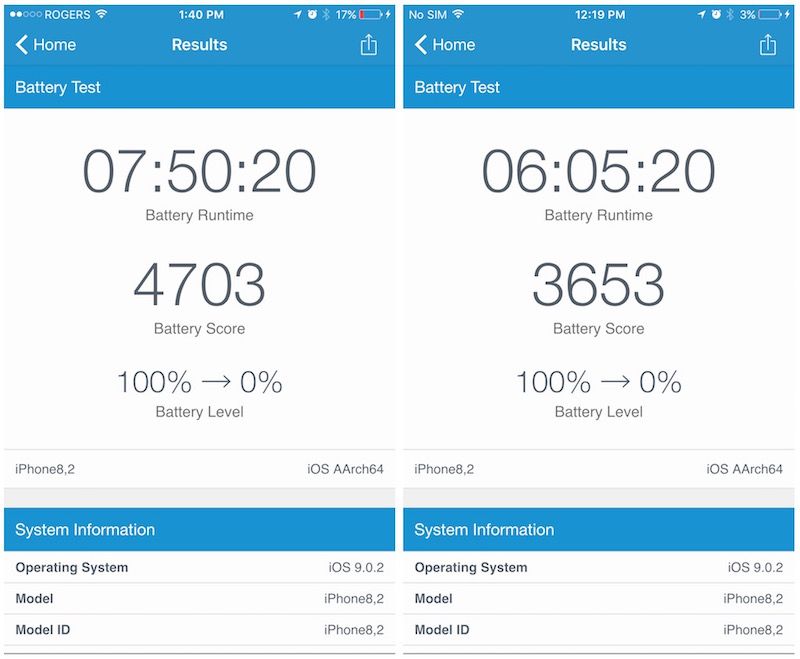 it was recently discovered that Apple is dual sourcing the A9 chip for the iPhone 6s and the 6s Plus from both TSMC and Samsung, meaning there are actually two different sized A9 processors floating around in the new iPHones.

A couple of benchmarks suggested there is little if any difference in chip performance between the two A9 variants, but now a couple of new tests have been performed, revealing new details. The TSMC-manufactured A9 chip could have a significantly better battery life.

A reddit poster compared Samsung and TSMC versions of the iPhone 6s Plus using the battery life test included in Geekbench 3, finding the TSMC version lasting nearly two hours longer than the model with Samsung A9 chip. MacRumors talked with John Poole of Primate Labs, the developers of Geekbench, and they said the this

"John Poole noted there have been rumors of TSMC's 16-nanometer process being "superior" to Samsung's 14-nanometer process in power consumption. He was, however, surprised by the amount of difference in observed battery life considering the various components have essentially identical performance benchmarks. Ideally, further controlled testing can be performed to offer a more accurate comparison between the variants."

While these early benchmarks and other tests do hint at the possibility of somewhat better power efficiency for the TSMC A9 over the Samsung A9, any impact on real-world performance has yet to be established.

Very interesting article. I'll have to get the app and test mine out...
You must log in or register to reply here.