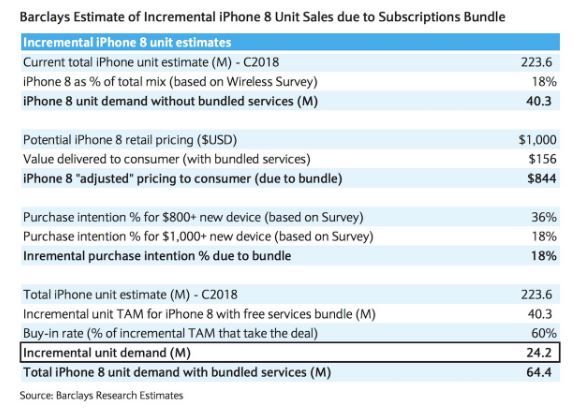 MacRumors reports on a new paper from Barclays analysts that sets out what Apple could do to reduce the impact of the expected high price of the forthcoming OLED iPhone. Most recent rumours have put the 64GB OLED iPhone starting at $999, the 256GB model at $1,099, and the 512 GB version at $1,199.

Barclays’ survey of wireless service customers found that Apple “might” sell approximately 40.3 million standalone OLED iPhones, but that could increase to 64.4 million OLED iPhones as part of an Apple Music/iCloud bundle.

Although this sounds like a great plan for Apple to adopt, it is still only a prediction from Barclays and has not been officially confirmed. However, Barclays analysts have had an impressive track record in the past when it comes to predictions about forthcoming Apple products.

Just me, but I didn't use a 3 month free subscription to Apple Music, and I wouldn't use a temporary 120GB iCloud subscription unless I planned to make a lifelong commitment to iCloud for maintaining my data. Otherwise I would either lose what was there or have to go through the pain of downloading it all and putting it on my laptop or computer. Doesn't make sense and I don't think either offer will bring in a countable increase in sales
You must log in or register to reply here.