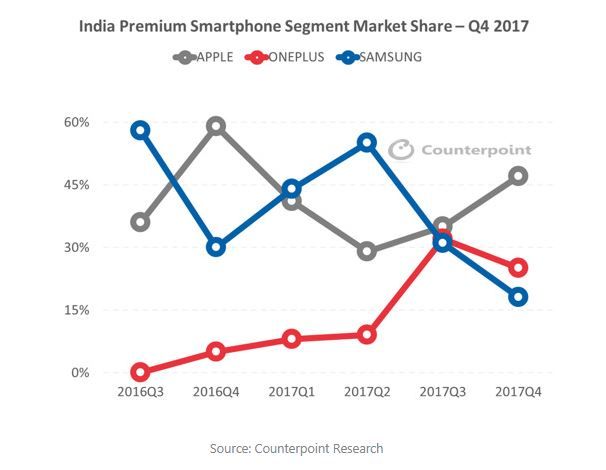 AppleInsider writes today that according to new data from Counterpoint Research’s Tarun Pathak, Apple is still top of the Indian premium smartphone market, with the iPhone X way out in front of its nearest rival, Samsung.

Counterpoint’s data shows that Apple had 47% of all smartphones costing INR 30,000 and over (which is approximately $470 US or €380). Surprisingly, Samsung actually came in third place in India, behind OnePlus, which had a 19% share in calendar Q4. This represents a big reverse of fortune for Samsung, which had a 30% share in the year-ago quarter and more than 50% share last summer.

Counterpoint Research said that Apple’s iPhone X was the “leading model in the premium segment” in India, which is a little surprising considering the fact that India is usually perceived to be an emerging market therefore less likely to be able to afford such an expensive iPhone. And when you realise that Apple’s competition in the Indian premium smartphone sector cost less than half of what the iPhone X costs, it makes Apple’s feat all the more remarkable.

Counterpoint also said that the iPhone 7 sold well in India, but the iPhone 8 “remains soft.”

Apple iphone 6 plus paved the way for Iphone in the year 2014 itself. Tim cook introduced large screen iphone 6 plus and it made apple team to think over large screen and road for iphone has been set .iPhone X is probably the biggest leap in design Apple has ever taken since the introduction of original iPhone in 2007.

Source : EDITED - no website links
Last edited by a moderator: Mar 23, 2018
You must log in or register to reply here.