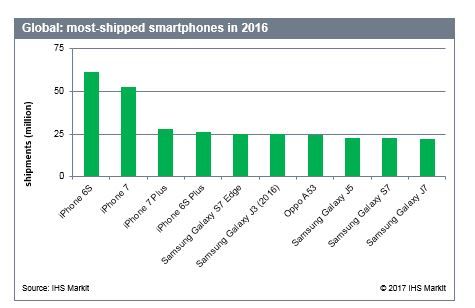 9to5 Mac reports today that according to figures released by IHS Markit today, Apple’s iPhone 6s came out on top as the most popular of 350 smartphones overall last year, beating the iPhone 7 and iPhone 7 Plus and all Android phones. However, the iPhone 7, which was not released until September last year, was still the top-selling device in the final quarter of 2016.

While it’s no surprise that the iPhone 6s sold more than the two newer iPhone models for the whole of last year, what might be a little more surprising is that the older iPhone 6s was more popular than any of Samsung’s new models last year.

However, Samsung’s phones still performed very well, taking up 5 of the top 10 positions, with the Galaxy S7 Edge in fifth place, just behind the iPhone 6s Plus.

“Apple again has demonstrated that its new iPhones integrate enough innovations and new features to drive sales and remain successful in the market,” said IHS. “The company is also capable of selling older devices for an extended period of time. For instance, the year-old iPhone 6s and 6s Plus were both among the most-shipped models in 2016.”
Click to expand...

The iPhone 6s is the Most Powerful Smartphone of 2015, Benchmarks Reveal

iPhone 7 Plus Was 2nd Popular Smartphone in China Last Year