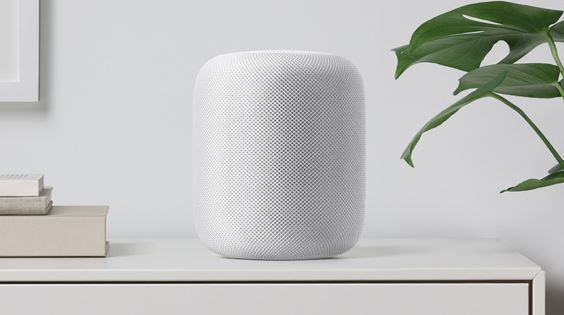 Pretty much all the details about Apple’s new wireless smart speaker had already leaked ahead of time, but the company was still keeping us all guessing about the name. When Apple’s senior vice president of Worldwide Marketing, Phil Schiller, announced that it would be called “HomePod” it was a little surprising, but in fact it suits the little speaker very well, and ties in very nicely with the iPod and AirPods brands.

Many of the rumours about Apple’s new smart speaker over the past few weeks had focused on it being a rival to Amazon’s Echo, and while it certainly is that, it was interesting to see that Schiller actually pitched the HomePod as a high-quality music speaker first and foremost, making it a combination of both Amazon’s Echo and a high-quality audio speaker such as Sonos.

“Apple reinvented portable music with iPod and now HomePod will reinvent how we enjoy music wirelessly throughout our homes,” said Schiller. “HomePod packs powerful speaker technology, Siri intelligence and wireless access to the entire Apple Music library into a beautiful speaker that is less than 7 inches tall, can rock most any room with distortion free music and be a helpful assistant around your home.”
Click to expand...

HomePod is designed with deep integration with Apple Music in mind, giving you access to more than 40 million songs. Powered by Siri, it will know your personal musical preferences and help you to find new music.

Here are some of the key features of HomePod:

As you’d expect, despite not getting her name on HomePod, Siri is very much at the heart of its operation. It has six microphones so that you can be heard even across the room with loud music in the background. Schiller also talked a lot about the speaker’s “musicologist” features, learning your music preferences and sharing them across devices, sourced from hundreds of genres and moods and tens of thousands of playlists. You can also ask Siri incredibly advance questions about the music library, such as “Hey Siri, who’s the drummer in this?”

And aside from all the entertainment functions, Siri and HomePod also work together as a home assistant, sending messages, getting news updates, and also controlling smart home devices.

HomePod will be available in white and space gray for $349 from December in Australia, the UK, and the US, and will launch in other territories at a later date.

Wow! An iPhone 6 powered speaker, enough hardware and brains to actively monitor a room's acoustic variations and control the output for monster master class sound. Can they be cascaded (set up in different areas running at the same time?

I'm going to be optimistic here, since I love everyone Apple too and It's a nice concept, but it's going to be way overpriced. I also noticed that they didn't really push the 'assistant' aspect of the HomePod, it's more about changing how we listen to MUSIC at home. Don't know why we're tippy toeing around what people really want.
J

Nothing about this screams I need this, much less want it. What I've read so far it's only through Apple Music, which I don't use. My tv already has pandora, Spotify , or any other music streaming and i already have surround. It's a no for me plus it's not worth what they are asking. I won't be purchasing this item
You must log in or register to reply here.

Apple’s HomePod is Out on February 9