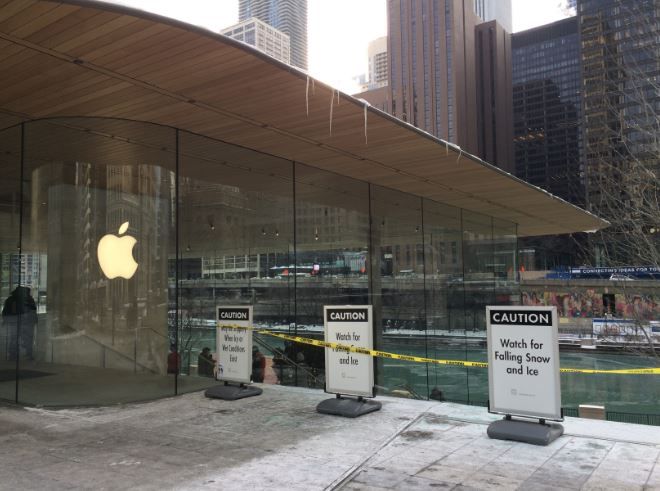 According to a report from Chicago blog Spudart, via 9to5 Mac, Apple’s magnificent flagship Chicago store with the roof that looks like a MacBook Air has a slight problem: the roof in question doesn’t deal with snow and ice very well, which is a big problem in a snowy city such as Chicago.

To be specific, the trendy roof does not have anything so prosaic or practical as guttering to catch the snow and ice. This becomes even more of a hazard due to the fact that the roof slopes forward as it is right on the banks of the Chicago River, meaning that people walking along the riverside path minding their own business could get pelted with falling snow or ice.

“Y’know, basic things like in Chicago, the weather gets cold. It snows. The snow falls off the roof. Don’t design a slopping roof where the snow can’t be caught or guttered off somewhere,” wrote Spudart.
Click to expand...

As Apple always works quickly to head off any such issues as soon as it identifies a problem, it has already roped off the areas affected around the bottom entrance to the store, complete with warning signs, as you can see in Spudart’s picture. The store’s top entrance is unaffected. Possible long-term solutions for Apple to address the problem could be heaters on the roof to melt the snow and ice.

I have to say, aside from the icy roof issue, this still looks like a truly iconic Apple retail store in terms of design, set in a stunning location, and well worth a visit if you happen to be in Chicago.