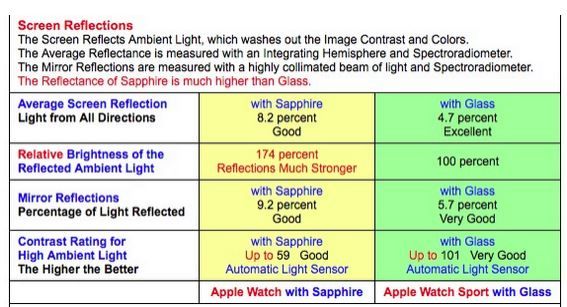 MacRumors writes about a new report by DisplayMate that shows just how much better the Apple Watch Sport’s Ion-X Glass display is than the more expensive Apple Watch versions’ sapphire displays when it comes to bright lighting.

According to the report, the Apple Watch Sport’s Ion-X glass has much lower reflectivity and much higher contrast than the higher-end Apple Watch models with sapphire displays.

While both models have exactly the same OLED displays internally, the different covers mean that they each react differently in bright light. In fact, DisplayMate found that the Apple Watch with sapphire display reflects 74% more ambient light than does the Ion-X glass of the Sport.

In dark environments there is very little difference between the two.

Here’s a quote from the DisplayMate report explaining further:

For the Apple Watch Sport with Ion-X Glass we measured the Screen Reflectance to be 4.7 percent, while for the Apple Watch with Sapphire we measured 8.2 percent Screen Reflectance, which is 74 percent higher than with Glass. Both values are about 0.6 percent higher than just pure sapphire and glass alone, indicating that Apple has done an excellent job in optically bonding both the glass and sapphire to the OLED display without an air gap.

The 74 percent higher Reflectance of the Apple Watch with Sapphire means that its screen will reflect almost twice as much surrounding ambient light as the Apple Watch Sport with Glass. And it takes surprisingly little ambient light for that to make a significant visible difference…
Click to expand...