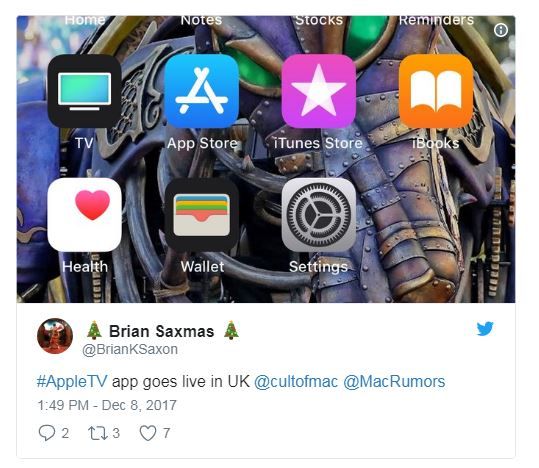 MacRumors reports that the official Apple TV app has today begun to roll out in the UK, France, and Germany, nearly one year since the app first launched in the US.

The TV app is designed to be an easy way to watch TV shows and movies gathered from many different video apps all in one place, and also to help you to find new TV and movie content by showing you recommendations that are based on content that you’ve watched previously.

You can also sync what you’ve been watching in the cloud so that you can pick up and continue watching on any other Apple device using the accompanying iOS TV app, which has also started rolling out in the UK, France, and Germany.

The U.S. Apple TV app supports more than 60 services, and local broadcasters such as ITV, Channel 5, and the BBC iPlayer are now being added to that in the new territories where the app is now launching.

Source: Apple's 'TV' App Starts Showing Up for Users in the UK, France, and Germany
You must log in or register to reply here.

iPhone 4S/5 Could Be Launching Oct 14 in US, UK, France, Germany and Japan