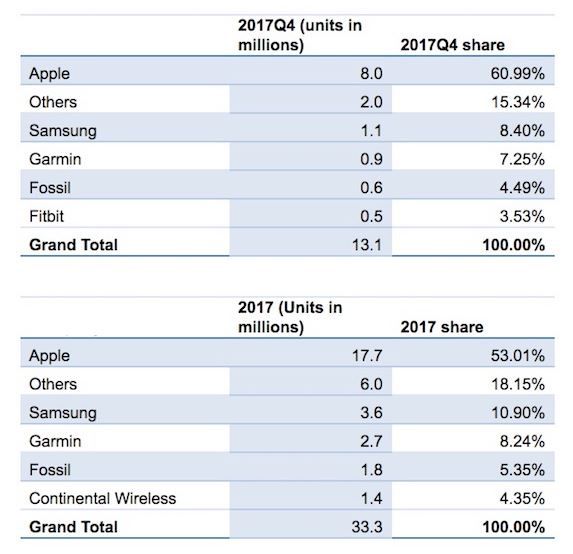 According to newly released figures from IDC, via MacRumors, Apple Watch is still the most popular smartwatch in the world, by a very big margin. IDC says that Apple Watch shipments exceeded 8 million units worldwide in the last quarter, also earning it the accolade of best-selling wearable device overall in the last quarter.

Apparently, one in every five wearables that shipped last quarter was an Apple Watch, with the Series 3 clearly being incredibly popular since it was released last September.

To put those figures in perspective, in the same quarter, Apple’s nearest rival, Fitbit, shipped 5.4 million wearables, and second closest rival Xiaomi shipped 4.9 million units in the same period. Forty-one percent of smartwatch shipments fell into the Other category, which was made up of smaller manufacturers.

As far as specific smartwatch sales data is concerned, IDC said that Apple Watch had an estimated 61% share of worldwide smartwatch shipments in the last quarter, way ahead of all other competitors combined.

Source: Apple Watch Outsold All Competing Smartwatches Combined Last Year
You must log in or register to reply here.