Apple Said to Have Sold More iPhones in China Than in the U.S. in Q1 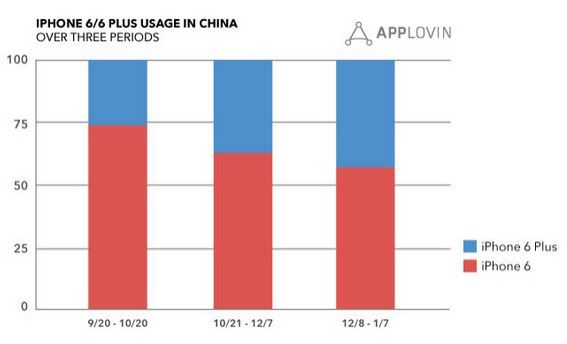 iDownload Blog reports that Apple is expected to announce tomorrow that it sold more iPhones in China than it did in the United States when it reports its fiscal 2015 first quarter earnings.

An article in The Financial Times, the original source of the story, says that reputable analysts estimate that Apple has “reached the turning point in iPhone sales” after the launch of the iPhone 6 and iPhone 6 Plus in China, and a new deal with China mobile, which is that country’s biggest mobile carrier.

As iDownload Blog notes, Tim Cook has gone on record several times in the past as saying that China is Apple’s most important market, which is no surprise when you consider that it makes up one fifth of Apple’s revenue, being the world’s second-biggest economy.

iDownload Blog also reveals a new chart from AppLovin that shows how iPhone 6 and iPhone 6 Plus use is booming in China.

Source: Apple expected to report selling more iPhones in China than in US
You must log in or register to reply here.

48 Million iPhones Sold in Q1, Thanks to China

Apple Gets Ever Closer to China Mobile Deal