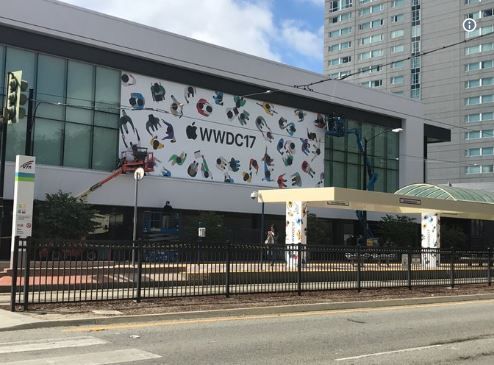 Apple kicks off its Worldwide Developers Conference (WWDC) at the McEnery Convention Center in San Jose, California, on Monday, where it’s expected to launch several new products, with rumours that this will include a Siri smart speaker as well as a 10.5-inch iPad Pro, new MacBooks, and possibly some other surprises.

9to5 Mac writes that preparations are in full-swing at the convention center, the most visible of which are the big banners that are being hung around the building. The graphics on the banners are in the same vein as this year’s WWDC invites, featuring groups of brightly clad people. Smaller banners have also been hung on lampposts around the venue, ready to greet the 5, 000 developers who will be attending WWDC next week.

The keynote event kicks off at 10 a.m. PT on Monday, and we’ll be bringing you all the news about the big announcements here.

Source: Apple begins decorating McEnery Convention Center in San Jose ahead of WWDC
You must log in or register to reply here.