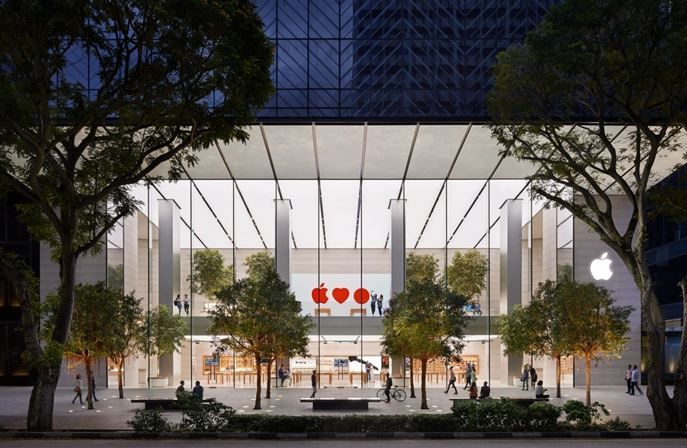 AppleInsider reports that Saturday was a great day for Apple in Singapore as the company opened its first ever store in the country, and Apple’s SVP of Retail, Angela Ahrendts was on hand to celebrate with the employees and customers.

Ahrendts was pictured posing with local Singapore DJs Justin Ang and Vernon A at the opening ceremony for the Knightsbridge mall. Earlier, she had tweeted, “Huge thanks to the 2,800 Apple employees in Singapore! We have a long history her & are thrilled to open #AppleOrchardRoad tomorrow.”

As ever with Apple store openings, the event attracted long lines of Apple fans around the building, which, as you’d expect from such a modern city, is a very impressive structure, two stories tall, with a 120-ft glass front revealing both floors, and with a curved staircase that is said to have been inspired by Apple Park, Apple’s new HQ in California. There are even trees planted on the second floor that came from Malaysia.

Until now, Apple’s east Asian stores have been confined to China and Japan, but soon South Korea will be joining Singapore as a new member on that list, with the first South Korean Apple retail store due to open there this November.

Media photos offer deeper peek inside Apple's first Singapore store
You must log in or register to reply here.

Apple to Open First Ever Retail Store in Taiwan