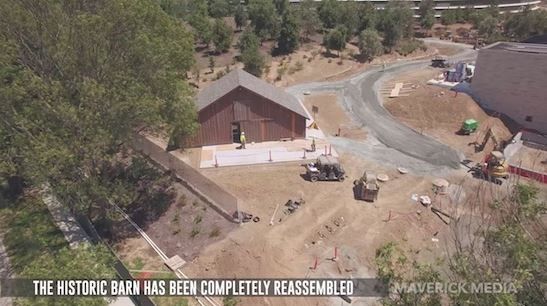 MacRumors reports on the latest Apple Park Campus 4K drone footage from Matthew Roberts that gives a great up-close look at some key areas of the almost-completed campus, including the Steve Jobs Theater, the visitor center across the way, the main round building, and also the historic Glendenning Barn.

The historic Glendenning Barn has been situated in the area since the beginning of the twentieth century. When Apple bought up the site of the old HP campus, it made sure to take the old redwood barn apart piece by piece, plank by plank, nail by nail, and carefully noted every aspect of its construction in order to be able to move it and reconstruct it in another location on the new Apple Campus. Apple even went so far as to stockpile redwood that had been salvaged from an old grove in case any original planks needed to be repaired.

It looks like all that painstaking planning on Apple’s part paid off, as Roberts’s new footage shows that Apple has managed to successfully rebuild the barn.

Apple Park will be surrounded by approximately 9,000 trees; the campus will also feature a large pond inside the “spaceship,” walking trails, benches, and an employee fitness center.

Source: Apple Has Finished Moving and Precisely Reassembling a Historic Barn At Its New Headquarters
OP