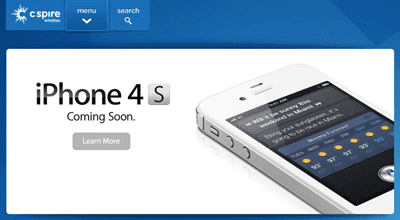 After news of Sprint network joining the iPhone carrier list earlier this month, another network joins in on number four. C Spire Wireless is a regional U.S. carrier that services about 900.000 customers in Mississippi, Memphis, the Florida Panhandle, parts of Alabama and Georgia. The C Spire already updated its website on Wednesday announcing that it will carry the iPhone 4S and even has a page dedicated to the new features of the Apple device.

The addition of this small network is a first for Apple, especially since its a regional carrier. According to Tim Cook, the new Chief Executive of Apple, the decision comes with their desire to get the iPhone in as many customer hands as possible, because, in their opinion, the 4S is the best phone they came with so far. Although the C Spire isnt one of the biggest four carriers in the U.S., it became Apples forth chosen network.

Out of the big four providers in the U.S., T-Mobile is the only one that doesnt offer iPhones to its users, mainly because of the 3G bands they use, as the 1700 MHz and 2100 MHz bands arent supported by Apples smartphone. T-Mobile services 33.73 million customers, out of 327 million mobile accounts in the States. Verizon, the largest U.S carrier, started selling iPhones back in February, ending the three years of AT&T Apple exclusivity. Sprint joined the list earlier this month, helping Apple break sale records from the first day of availability with this carrier in both iPhone 4S and iPhone 4.

I've heard of them. I wonder how good their coverage/pricing is. Alabama is on that list though ! I'm gonna check this out. Thanks for posting this iDan!
You must log in or register to reply here.

Three More Regional Carriers in the US to Get the iPhone

nTelos Wireless Gets the iPhone in the US

The iPhone 5s is the no.1 selling smartphone at all U.S carriers