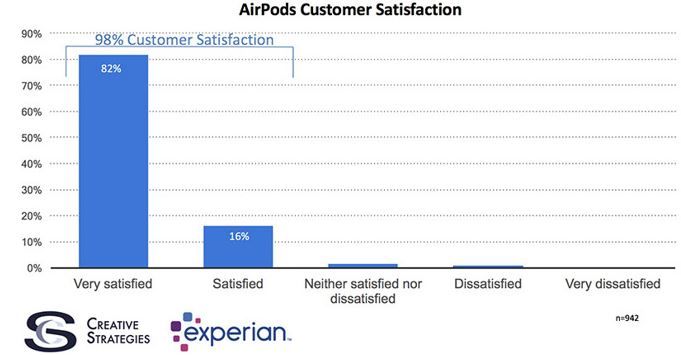 AppleInsider reports today that a new survey from market research company Creative Strategies, an unprecedented 98% of AirPods owners say they are either “very satisfied” or “satisfied” with the wireless headphones.

The survey, which was carried out by Creative Strategies in conjunction with Experian, polled 942 people, finding that 82% of AirPods owners were “very satisfied” with the product, and 16% were “satisfied.”

“The overall customers satisfaction level of 98% sets the record for the highest level of satisfaction for a new product from Apple,” said Ben Bajarin, principal analyst at Creative Strategies. “When the iPhone came out in 2007, it held a 92% customer satisfaction level, iPad in 2010 had 92%, and Apple Watch in 2015 had 97%.”

Aside from the satisfaction rating, the survey also asked the AirPods owners how willing they would be to recommend the product to others. Respondents gave a Net Promoter Score (NPS) on a scale ranging from 0 to 10, with 0 being “not likely at all” to recommend, and 10 being “extremely likely.” The AirPods’ overall NPS was 75, even better than the iPhone’s 72 NPS. Bajarin said that specialists regard an NPS rating of over 50 as excellent, and an NPS rating of over 70 as a world-class product.

Source: Apple's AirPods achieve 98% customer satisfaction in new study
You must log in or register to reply here.