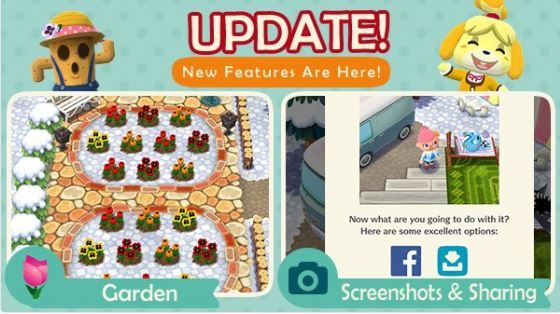 Animal Crossing has had a big update today, and Pocket Gamer has all the details. The main focus of the update is a really cute new gardening feature, where you get to have your own garden next to your campsite. Aside from just admiring your lovely new garden, you get to plant seeds there and then pick the flowers when they grow. They can then be exchanged with the adorably wavy-armed head gardener Lloid via his “Flower Trade” program for items such as potted plants. You can also sell the flowers that you pick yourself for bells. Lloid also sells fertilizer that will speed up plant growth by 1 hour, and you can order packets of seeds from him for just 80 bells. Judging by the garden menu you can also catch bugs in the garden and other creatures, most likely after a certain milestone in your gardening abilities has been reached. Visiting friends’ gardens is another big part of the new feature, where players can help out other players by watering their plants. Overall it’s a really fun update, and a great way of keeping players interested in the game after they’ve fulfilled all current animal requests.

Another welcome feature included in the update is the ability to take photos and share them directly to social media from within the game. The feature only works in your own campsite or camper, however.

Source: http://www.pocketgamer.co.uk/r/iPhone/Animal+Crossing+Pocket+Camp/news.asp?c=76227
You must log in or register to reply here.

Plants vs. Zombies for iPhone Gets Updated with new Game Mode and Mini-Games

Plants vs. Zombies Gets Major Update