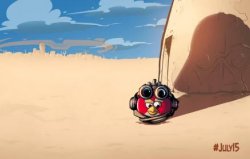 Rovio, the creator of Angry Birds, announced today that something big will be announced Monday, July 15th. Along with the blog post, Rovio posted the image above and reported

"We&#8217;re talking the biggest character line-up ever, awesome new powers, and maybe even a few surprises!"
Click to expand...

The image shown might look familiar to Star Wars fans, since it is a cloned copy of an original Star Wars Episode 1, and possibly one of the most iconic images related to the series.

Putting all of the pieces together, we're thinking Rovio will be announcing a prequel to Angry Birds Star Wars, which was released November 8, 2012. The prequel might be an update to the current Angry Birds Star Wars app, or a standalone app in the App Store. We're guessing this new release will include characters and worlds from Star Wars Episode 1, 2, and 3. We'll keep you posted.

That explains them giving away the current Star Wars app for free yesterday.

Darkstar2007 said:
That explains them giving away the current Star Wars app for free yesterday.
Click to expand...

It's still free, I just downloaded it, thanks for putting me on to it.

bought it on release day for my ipad, maybe ill get it for my iphone
You must log in or register to reply here.