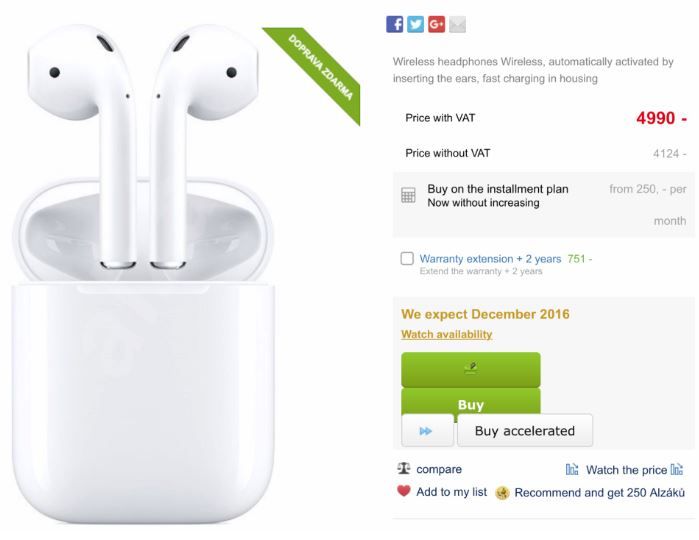 9to5 Mac reports that Apple’s delayed AirPods wireless earphones could actually be available to buy this December after all, despite earlier rumours that they might be delayed until the beginning of next year, thus potentially costing Apple millions and millions in lost holiday sales.

The new information comes via the website of a retailer in the Czech Republic, Alza.cz, which lists the AirPods as being available to buy from the site in December 2016. However, it’s hard to tell if this is based on accurate insider information, or mere guesswork on the part of Alza.

Elsewhere, predictions as to when the AirPods might be available to buy range from the very optimistic timeframe of as early as tomorrow from Germany’s apfelpage.de, and the very pessimistic January 2017 from the aforementioned source in Apple’s Chinese supply chain that was reported by DigiTimes a couple of weeks back. Let’s hope that the Czech supplier is right and everyone gets to enjoy their AirPods before the end of the year.

I can't wait to get to get the shops not

Junior said:
LOL. You can tell you know absolutely nothing about the earpods vs. airpods.
Click to expand...

With luck, we will soon get to find out.
You must log in or register to reply here.