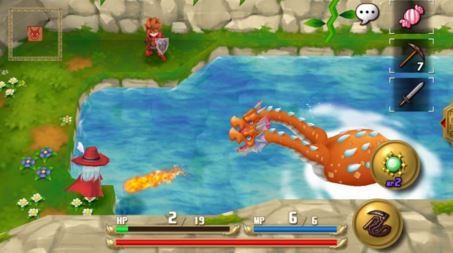 Square Enix has released yet another of its classic RPGs for iOS today, with Adventures of Mana arriving in the App Store.

Adventures of Mana made its debut on the Nintendo Game Boy back in 1991 (it was called Final Fantasy Adventure in North America and Mystic Quest in Europe), kicking off the beloved Mana series of games. It was later remade for the Game Boy Advance as Sword of Mana.

Whatever’s its name, and whatever platform it was released on, it certainly boasted some truly memorable characters, as well as an absorbing storyline revolving around the protection of the sacred Mana tree and the search for a legendary sword (there’s always got to be a legendary sword!). And chocobos!

The original storyline remains in this new version of the game in all its glory, but the quest has been enhanced with a new, rearranged soundtrack from the game’s original composer, Kenji Ito. Graphics and controls have also been updated.

Here’s some of what the game’s producer, Masaru Oyamada, had to say in a special message to the fans posted on the Square Enix blog:

“I will be very happy to see Adventures of Mana, the starting point for the whole Mana series, being played again by the people who played and loved it when it first came out, as well as by new players who will get that same emotional experience that people did the first time round.”
Click to expand...

As with many of Square Enix’s revamped iOS versions of classic games, it’s not exactly cheap, costing £10.49/€13.99/$13.99, but doubtless that won’t deter diehard fans, and it has to be said, it is truly looking fantastic!